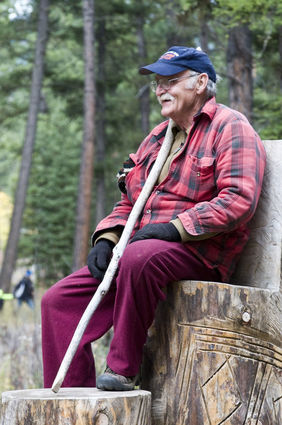 Robert W. Ledeau, known as Pepe' to his many friends, left this world July 18, 2020 after a brave battle with cancer.

Bob spent his final days attended to by caring Hospice helpers and close friends in his handcrafted log home on "Our River Bottom". In keeping with his generous nature, his land and home were left to the Lincoln Community Hall.

Pepe began the journey Feb. 9, 1950 in Missoula, Mont., and spent his youth on the family farm in aptly named Frenchtown, Mont.

Upon graduation, Bob entered the Navy and served on a tugboat for two Vietnam deployments, a time he called the crazy Navy days. After discharge, Bob bounced around for a while. He completed the Vo-Tech welding course and worked at various sawmills and log home yards in the Bitterroot.

In the mid-80s, he purchased his river bottom property from his mother and step-dad and began building a log cabin. This was a special place that saw many gatherings of the Ledeau/Bison family and many friends. Ledeau fit perfectly there and made friends for life. The welcome sign was always up and a good part of bachelor grub made with whatever critter was in the freezer could be had. You should be prepared for no dishes that match or other accoutrements common to a normal house. His wardrobe was a thrift store fashion statement with mustard added. His dish towel was apt to be an old t-shirt but that was Bob Ledeau, who lived lean and kept out of politics, religion, gossip or opinionated rants. He was open and honest about himself, friendly in conversation and always had you pegged with a knowing gaze. He was fearless, hated bullies, and had your back. He was a man's man and a kind man, more like an old soul, unique in his time.

Pepe's family is gone now, but his Lincoln family will miss him. Valerie, his lab, has a good home and "Our River Bottom" is quiet now, but maybe you can hear something in the rattle of the Aspen leaves there like a good spirit in the night.

In Memory of Robert 'Pepe' Ledeau