From Gold Pans and Singletrees

Mail delivery provided one link with the outside world and within the Blackfoot Valley, and in 1921, citizens of Lincoln looked into another form of communication. At two o'clock on Sept. 27, 1921, the first meeting of the telephone company was called by Mr. Holgate. Paul Didriksen was elected secretary. The members discussed the materials they would need for the telephone service. They talked about what kind of posts, where they should be placed, and who would dig them and how. Answers to these questions were left to the directors of the company.

Mr. Herrun of the United States Land Office mentioned that the poles should not be cut on private land. He suggested the poles be secured from the state by applying to the State Land Office.

On Oct. 2, 1921, the second meeting was called by A. J. Horsky who stated the incorporation papers were ready and would be recorded at once. The first order of business was to again elect officers. They were elected as follows: Len Lambkin, president; R. E. Hooper, vice-president; P. M. Didriksen, secretary; Mr. Hibbard, treasurer.

It was decided, at this same meeting, that Helena Hardware Company would furnish the wire for the lines. They decided to get dry poles where they could be obtained for the least expense. A special meeting was held Oct. 9, 1921. Len Lambkin reported the staking out of the lines as follows: 155 poles from the Hotel to Stemple, 143 poles from Stemple to Rogers Pass. R. E. Hooper offered to go over Stemple Hill to cut poles. He was allowed wages of forty-five cents an hour. 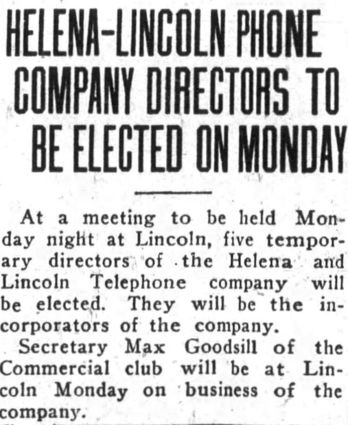 The next meeting was held Oct. 16, 1921. Len Lambkin stated that it would take 218 poles from the Hotel to Stemple instead of 155. Mr. Holgate reported that the switching point could be either at the Rosencrantz's at Canyon Creek or at the Rochelles' at Helmville junction. The directors voted on the Rosencrantz location. Mr. Holgate also stated that the farmers' line telephone company from Canyon Creek wished to make their connection with Helena over the Lincoln line. Also the farmers' line people would dig holes and set poles if the Lincoln company would string the line. Mr. Holgate suggested that Lincoln turn over the line from Canyon Creek to Marysville junction to Bell Telephone Company because they could do the upkeep if they would accept the arrangement.

This system was kept intact until 1953 when a new dial system was installed. At this time, instead of ringing long and shorts to reach each other, people were assigned phone numbers. There were still party lines, but gradually everyone was put on a single line service.