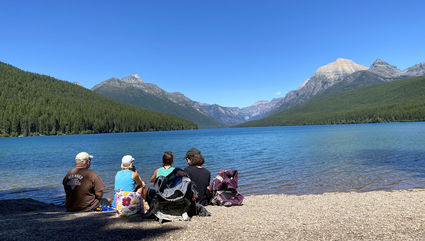 Travelers take in a recent view of Bowman Lake at Glacier National Park.

MISSOULA – In 2019, nonresident travelers spent $3.77 billion throughout Montana, a 5.4 percent increase from the previous year. More than 12.6 million nonresidents visited in 2019.

Research by the University of Montana's Institute for Tourism and Recreation Research reveals a different story in 2020. Nearly all of the second quarter was shut down to travelers this year due to the pandemic, creating a jolt to that yearly injection of money and visitors into Montana's economy. The second quarter generally accounts for a bit more than 20 percent of annual traveler spending in the state.

In general, when the two national parks do well, Montana's tourism does well. As travelers drive to the parks, they spend extra time in Montana just to get there.

"What we expect to see, however, is a change in nonresident spending patterns for 2020," said Jeremy Sage, ITRR associate director. "For example, with nervousness about dining in, we expect higher spending in the grocery and snack categories and less in restaurants and bars."

Fuel always has been a high expenditure by nonresidents visiting Montana, but this year gasoline prices are lower than they have been in the past 20 years.

"The conundrum for fuel spending is that the pandemic actually encourages people to drive around more for sight-seeing while on vacation and spend less time stopping at museums and other attractions because they are either closed or people are uncomfortable being in indoor settings," Sage said. "So fuel spending could be on par with other years in terms of average daily spending in that category."

Accommodations, as well as restaurants and bars, are taking a big hit in 2020, ITRR Director Norma Nickerson said.

"A recent survey of tourism-related business – the fourth in a series of surveys – is showing that accommodation owners are still seeing cancellations and fewer reservations compared to the same months last year," she said.

Seventy-eight percent (121 respondents) of the accommodations owners in the survey reported decreased reservations for August, with an average decrease of 52 percent compared to August last year.

"In general, however, visitors are waiting to make last-minute decisions on travel as they watch the number of COVID-19 cases go up or down, and their comfort level of traveling changes based on those numbers," Nickerson said.

Campgrounds are an exception to the general decrease in accommodation business. Nationally, there are reported spikes in recreational vehicle sales and rentals. Campground respondents in the ITRR tourism business survey basically agree. Twelve of the 14 campground owners (85 percent) said inquiries are up or have stayed the same.

"So it's business as usual for the camping industry, except, of course, for the extra cleaning, mask-wearing and social distancing," Nickerson said.

In normal years, Montana's six travel regions and 16 of the counties with the highest levels of nonresident spending have shown that visitation and spending is widespread throughout the state and that all regions benefit.

How different will these numbers be in 2020?

The Glacier and Yellowstone regions, home to Montana's two iconic national parks, receive the majority of nonresident travel spending, according to Kara Grau, the ITRR assistant director of economic analysis.

"In 2019, both those regions received over 30 percent of traveler spending," Grau said. "We expect those regions to continue to lead the state in nonresident spending in 2020 but realize that overall traveler spending will take a big hit this year due to pandemic-related travel restrictions, closures in the parks and consumer hesitancy in travel."

The full report on 2019 estimates of the economic contribution of nonresident travelers in Montana travel regions and counties is available on the ITRR website at https://scholarworks.umt.edu/itrr_pubs/411/.

All information and reports published by ITRR are available online at http://www.itrr.umt.edu.