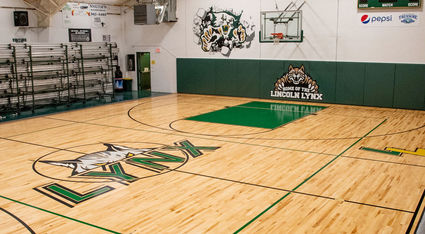 A refinished Lincoln gym bears a new floor graphic and new all pads.

The Lincoln School gym received something of a makeover over the summer.

Derek Perez, Lincoln School Custodian, said the gym floor was sanded down to bare wood, refinished, given new school graphics and resealed. He said it's the first time the floor has been rejuvenated worked on since the original gym floor was replaced in 2007.

The design features the ears and eyes of a lynx peering over the word LYNX. The iconic L's at the edge of the floor were also updated, with a sleek double L design, rather than the older L with a lynx perched on it.

"We actually got to design the floor how we wanted it," Perez said. The work on the floor was finished earlier this month. In addition to the few floor design, The gym got a set of new pads for the walls on either end of the court, featuring additional new graphics. Perez sad the old woes had been in place since about 2008 and had gotten pretty worn out over the years.

However, it may be a while before very many fans get a first-hand look at the upgrades.

Based on a conversation with Lewis and Clark Public Health a couple weeks ago, Lincoln Schools Brown had hoped their COVID-19 policy regarding attendance at school sporting events would primarily affect schools with larger teams, and potentially allow more than 100 Lincoln fans to socially distance in the stands.

However, last week he learned that 50 is indeed the "magic number" for Lincoln as well. No more than 50 people, including players, coaches staffs and officials, can be in the gym during games. But, since Class C teams do have fewer players, that doesn't necessarily rule spectators out entirely.

"I allowed one fan per player on Saturday, and no fans from visiting teams," Brown told the BVD. "That will be the procedure for now. We had a total of 45 people in the gym, counting all." 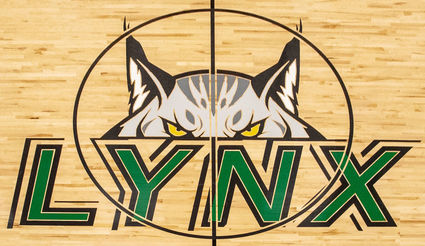 Brown said from what he's heard thus far, that same "magic number" of 50 people in total will also apply to football games. He said he's waiting to hear if fans will be allowed to watch the games from their vehicles.

Superintendent of Public Instruction Elsie Arntzen came out last week against rules barring spectators from school events, which includes musical performances. Gov. Steve Bullock, however, voiced his support for such restrictions during a press conference Thursday, saying: "the ability for local jurisdictions to be more restrictive should continue."

Similar restrictions in Yellowstone County prompted a rally in Billings Friday, sponsored by "Let Us Watch Montana" and the "Montana Sports Fans Alliance." According to news reports, the Billings-based Let Us Watch group is primarily concerned that such decisions have been made without input from parents.