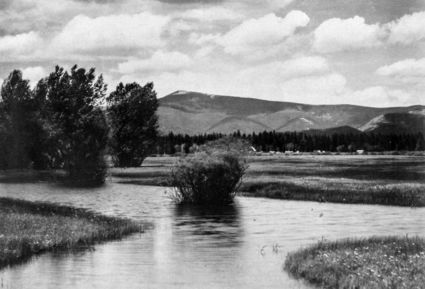 An image published in 'Outdoors Around Helena. Montana' in 1920, credited to Lyle, shows the 'Blackfoot country' as touted by the Helena Rod and Gun Club in 1921. Water from Poorman Creek flowing through the fields just west of Stemple Pass Road. Although the big dairy barn hadn't been built at this point, familiar horse barn still standing on Eddie Grantier's property can be seen in the background.

For the benefit of those who would enjoy the wonderful Montana out-of-doors to the limit, the Rod and Gun Club sug-gests a motor and fishing trip of a hundred miles, outside the area of the Helena National Forest, which embraces imposing stretches of country south and southwest of the capital, and a great tract east of the Missouri River to the Big Belt Mountains.

The suggestion for a full day's trip has the Big Blackfoot country as the objective, and is this: Leaving Helena, take the Silver road to 14-mile post, thence due west up Canyon to Vir-ginia Creek, with its remains of the old placer diggings and its present-day good fishing grounds.

The next point of interest is the old mining camp of Stemple, situated almost on the ridge of the continental divide, and then you drop down into McClellan Gulch, on the western slope, to Poorman's Creek and the big trees of the Blackfoot. 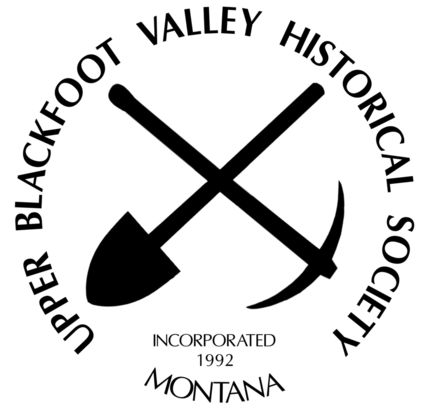 You are now in the heart of the best fishing country in the West. Native trout, bull trout and white fish especially abound in the Big Blackfoot River and Keep Cool, Beaver and Little Spring Creeks. Lincoln, in the far western part of the county and on the south fork of the Big Blackfoot, has a hotel, a store, supplies and other accommodations.

The return is usually by way of Flesher and Canyon Creek.

The spokesman for the Rod and Gun Club says: "The roads are perfect. So is the fishing, if you are a fisherman."

Source: Montana its Story and Biography, by Tom Strout, Volume 1,