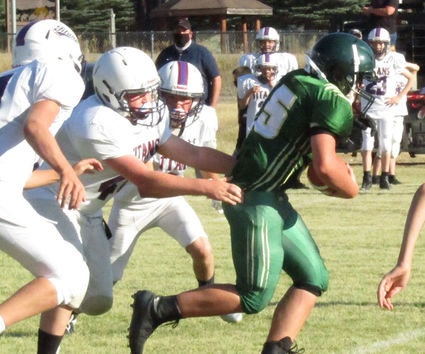 Veteran starter Andrew Brown is the go-to-man to move the ball for the Lynx.

It took a big bus to bring the combined Power-Dutton-Brady Titans and their coaches to Lincoln on Friday, Sept. 11 to face the seven brave members of the Lincoln Lynx junior high squad in their first six-man football gridiron match of the fall.

The score at half time, 0 - 14, showed nerves shaking out of the local Lynx as the young men were finding their game faces after two weeks of practice; practices long on hitting dummies but short on actual scrimmage against real live bodies.

"We did a lot better in the second half after we settled down," new Lynx recruit Teegan Tybo told the BVD.

The hot afternoon was a constant worry for Coaches Shane Brown and Derek Perez, keeping all the players hydrated and focused on play calls. "Some of the newer plays which were recently added didn't quite connect with the players, but another week of practice should help our memory," quarterback Kayden Tybo said.

Full back Andrew Brown took the QB handoffs for several long gains on the ground and was also the Lynx kicker and extra point man. Brown carried in the first Lincoln Lynx score, helped by blocks from Teegan Tybo and end Noah Barnett. 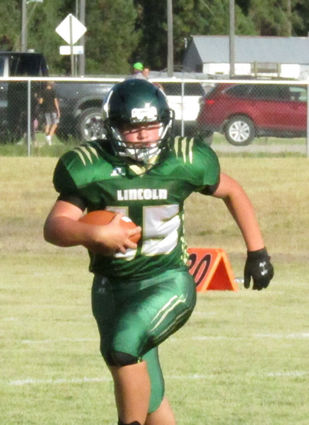 Andrew Brown carries the lumber for the Lynx for a first down.

Center Tahvo Lattin made a lot of wide-body tackles on defense , and got more accurate with his snaps as the game wore on. He was helped by his little brother, Asa Lattin who is only a 6th grader, but is quickly getting the hang of blocks and tackles.

Seventh grade veteran Roegan Dietz caught a thread-the-needle pass in the end zone from Kayden Tybo to bring the final score to 14 - 38, a loss in the books, but a win on the sidelines for the "first-time out" team.

Assistant Coach Derek Perez was pleased with the quick adjustments the leaders made on the field to match up with the Titans when they changed formations.

"I was proud of them. They stayed tough through out the whole game. Our new players, the Tybo brothers, are a positive and experienced duo and will be great future leaders," he said. "This team has a lot of potential and we will keep getting better and better."