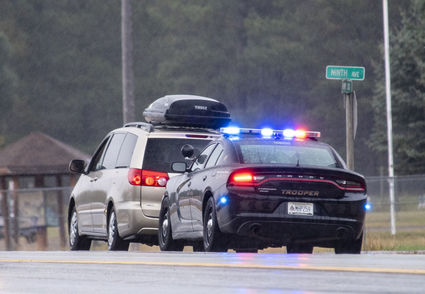 A Montana Highway Patrol Trooper stops a driver in the School zone on th east end of town.

Concerns about speeding and other traffic violations are nothing new to Lincoln, but after about a year without a Montana Highway Patrol trooper assigned to Lincoln, those concerns have grown due to the limited enforcement here.

Last fall resident trooper Jesse Knaff left the Highway Patrol and there hasn't been a trooper stationed here on a full-time basis since, and that may not change in the near future due to changes in the MHP recruiting process.

Capt. Josh Brown, the District 3 commander, told the BVD last month that a new recruiting process started earlier this year has had an impact on stations like Lincoln. The new process, implemented in the spring, allows recruits to choose where they want to live when they apply, rather than the MHP placing them where they're needed. He said it's a move designed to open up the process to qualified individuals who may not apply to the MHP because they don't know where they'll live.

"Our hope in this is to try to get people more confident in applying with us that they don't have to uproot their family or their lives to move." Lt. Col. Jason Hildenstab told KRTV when they opened up their recruiting cycle last March.

Alternatively, a more experienced troopers could ask to be assigned here.

"It's still a station. I was hoping to fill it," Brown said of Lincoln. "It's just one of those things. It was put out for bid and didn't receive any bids from the field."

Although troopers from Helena do cover Lincoln, he said they have been "a little short staffed" there as well.

"We've had our hands tied a little bit as far as having a trooper go up there to cover on any type of regular schedule," Brown said. "We obviously respond up there if there's a call for service or a crash, but as far as being proactive, it's been a little bit tough."

Recently, Brown said they have been assigning shifts up here to help alleviate the problem.

"Hopefully you've seen some activity up there. We're trying to get people up there when we can," Brown said. "Hopefully it's making a little bit of a difference."

Nevertheless, the need for a trooper who's permanently assigned to the Lincoln area has been highlighted this summer, as area first responders have dealt with a higher-than-normal number of accidents.

The Montana Highway Patrol investigates all vehicle accidents in Lewis and Clark County, but for volunteer first responders in areas like Lincoln, that often mean a long wait. Once any injuries are taken care of, local volunteer firefighters or QRU members also provide traffic control and help keep accident scenes secure until a trooper arrives and completes an investigation.

"We understand that when a trooper was stationed up here, she or he could be anywhere," Lincoln Fire Chief Zach Muse said. "But the occurrences of us having to sit on the highway for an hour, two hours, waiting for a trooper to show up, so the tow truck can do its work, so we can get out of there, have increased tenfold."

Muse said the increased wait times also affects members of the traveling public on the roadways, as well as any witnesses who have to be interviewed.

"They're inconveniencing hundreds of people a year by not having a trooper here," he said.

Lewis and Clark County Sheriff Leo Dutton echoed Muse's concerns and said he was disappointed they haven't gotten another trooper assigned to Lincoln yet. He mentioned having a trooper here not only impacts accident scenes, but he or she serves as a force multiplier for deputies. Lincoln-area Deputy Sheriff Robert Rivera noted that the deputies work as a team with the resident trooper to ensure complaints are handled in a timely manner.

Dutton said a local trooper also improves the local quality of life in Lincoln by "flying the colors" and helping to slow traffic on highway.

"I know some people want tickets written - except to them - but it does make a difference to have the presence of a patrol car out there," he said.

Brown didn't have an answer on when someone might be assigned here, or when someone might request it as a duty station. He said it would be great if someone from Lincoln were to apply to join the MHP. A new recruiting cycle opened Sept. 1. 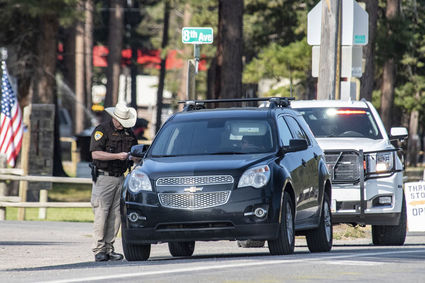 Lewis and Clark County Sheriff Leo Dutton visits with a motorist he pulled over in the in Lincoln Sept. 4.

"Hopefully once we get a little bit closer to being fully staffed, we'll get someone there," Brown said. A recent influx of new troopers may help them further improve their coverage out of Helena in the coming months.

On Sept. 3, the MHP commissioned 11 of the new troopers recruited in the spring. Although none selected Lincoln as their duty station, Brown said three were going to Helena. Once they complete training with their Field Training Officers, they should help lighten the load for Helena, which will carry over to Lincoln.

Brown said if there are specific issues in the area, they can get people up there to address them, and are doing the best they can with the resources they have.

"We appreciate the understanding," he said.