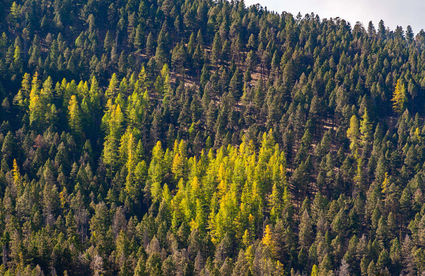 Larch in the Blackfoot canyon stands out from the surrounding pines.

"The planted larch trees are burnished gold. What a wondrous forest they have become."

Larch trees are known as deciduous conifers, meaning that although they may look similar to other large needle trees, like pine or spruce, larch varieties drop their needles each autumn.

As their needles prepare to fall, larches turn a glowing yellow, similar in shade to aspen. The needles of larch trees are slender and soft and grow in clumps of 15-30, sprouting out of small bumps along the trees branches called dwarf twigs, according to the Fire Effects Information System of the United States Forest Service.

The FEIS states that western larches mostly only grow in Montana and farther west and that they can be found along valley bottoms, benches, and mountain slopes. Larches can be found in the Mission Mountains and near Seeley Lake. Closer to Lincoln, larches can be found at Copper Creek and Alice Creek as well as at the North Fork Blackfoot River Trailhead. Western larch can also be seen along the slopes near Lone Point Drive and in Lincoln along North 2nd Street

The Jim Girard Memorial Grove of larch trees grows off Boy Scout Road near Seeley Lake and includes the largest larch in the world, nicknamed Gus. The grove includes 60 acres of old growth western larch, many more than 600 years old, according to the National Museum of Forest Service History. Gus is over 1,000 years old and reaches 153 feet tall, making it taller than the Statue of Liberty. It measures more than 22 feet in circumference and over seven feet in diameter and is believed to have weathered more than 40 wildfires.

Western larch rarely grow in stands alone, according to the FEIS, and can often be found near Douglas fir and Ponderosa pine. Additionally, they can be found with understory species including huckleberries, thimbleberries, serviceberries, and beargrass.

Larches are considered great lumber trees of the west and grow on average more than 100 feet tall. Although conifers are soft woods, larch wood is relatively hard and heavy, and easily worked with tools. It serves well in conditions where other woods might decay, making it good for projects like railroad ties, mining timbers and boats.