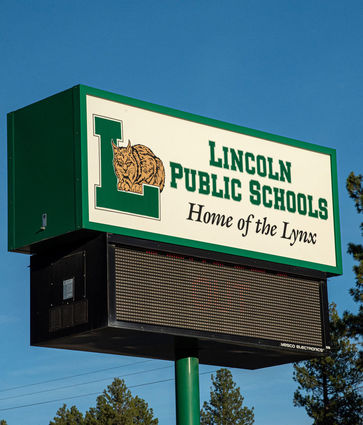 Lincoln School reopened Monday morning after being closed last week due to concerns about a possible close-contact coronavirus exposure.

The closure resulted from a message about a possible close contact with someone who had COVID-19 and was largely a precautionary measure, said Shane Brown, Lincoln Elementary School principal and the COVID-19 response team leader.

Brown saw the message, sent late Monday night, at about 4 a.m. Tuesday morning. "That's when we started doing some chatting and catching up with (Superintendent) Jen (Packer) before school started."

After talking to Packer and a couple school board members, they decided it would be best to close the school down Tuesday and Wednesday.

Brown admitted the timing of the decision Tuesday morning out wasn't ideal but given the situation, he said they contacted parents as early as they could.

"We couldn't get the word out fast enough," he said. "There were kids at the bus stops, there were kids getting dropped off. It was pretty crazy for a couple hours there Tuesday morning."

He said they were able to meet the kids and give them limited access to the school to retrieve the devices they needed for the two days of distance learning.

The school's precautionary measure followed their standard procedure for a positive COVID-19 case at the school.

"If we knew we had a positive case in the school, we would shut down for a minimum of two days, until we could do some contract tracing to see who would have been affected," Brown said.

Brown said in the worst case scenario with a positive test, exposure would have been limited to just a couple grade-levels.

"Given that close proximity with kids, we just thought it would be best," Brown said.

Since there was no school Thursday, due to the statewide teachers convention, students only had two days of distance learning, and the closure gave anyone who may have been exposed five days outside of school to start showing symptoms.

The individual who reported the possible close contact, a substitute teacher, has since tested negative.

Brown said the custodial staff finished cleaning the school Thursday morning, with custodian Derek Perez reporting that everything went well. In addition to sanitizing surfaces throughout the school with disinfectant. Perez said they also used UV lights to help kill viruses in every room in the building.

The school closure also led to the cancellation of the home volleyball game against Darby Oct. 14, and the away game to Noxon Oct. 16.

"We were supposed to host on Wednesday, but given we were shutting down the school, we couldn't host," Brown said. "Then I didn't know enough to send them all the way to Noxon, which was non-conference."

He said they were trying to reschedule the Darby conference game, but added it wasn't looking good, due to the pending district tournament. The Tuesday, Oct. 20 game against Seeley lake was the last home volleyball game for Lincoln.

Brown added that its looking like there won't be typical district or divisional tournaments this year due to concerns about COVID-19 and related restrictions in the counties where they were slated to be played.

Instead of large tournaments, he said it looks like the higher seeded team in each contest will host their opponents in single elimination play. The lady Lynx will be on the road for their first game Tuesday, Oct. 27.

Brown said the Montana High School Association has also opted to push back the start of high school basketball, as well, due to the recent uptick in COVID-19 cases statewide and the number of cases that are occurring in schools.

"There are a lot of schools that are shutting down or going to remote learning right now," he said, adding that most of them are larger schools. Practice, which was scheduled to begin Nov. 20, will now start Dec. 7, with the first games games slated for Jan. 4.

"They felt it would be best to push that start back and hopefully flatten that curve," Brown said. He added that junior high school basketball will start practice this week.