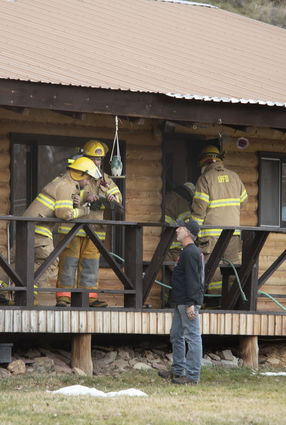 Lincoln firefighters speak with Fire Chief Zach Muse after ensuring a kitchen fire at the Bordeleau residence was under control Sunday evening.

The Lincoln Volunteer Fire Department responded to a small fire at a residence along Highway 200 about 15 miles east of Lincoln Sunday evening.

The fire, which effectively destroyed the homes kitchen, started when a pan with grease in it caught fire.

Homeowner Denis Bordeleau managed to extinguish the fire, despite not being able to see the flames for the smoke, by breaking a window and spraying the kitchen area with water from his garden hose.

Unable to re-enter his house due to the thick smoke, and with the power knocked out during the fire, Bordeleau went out to Highway 200 and flagged down a passing motorist, who called in the fire.

Lincoln Fire Chief Zach Muse told the BVD the hot smoke ignited up high in his vaulted ceiling, even melting the smoke detector, but only scorched the timbers and wood on the ceiling. He said he's not sure how it didn't start the whole house on fire.

Lincoln Fire Captain Ernie Lundberg said the building sustained significant smoke and water damage in the kitchen area. Firefighters put out some of the remaining embers from the fire and used a thermal imager to verify they hadn't missed any hot spots, then stayed to ventilate the house.

I'm missing a kitchen now, but the house was saved. His cat survived the ordeal as well. Muse said she apparently stayed low behind the blinds by the sliding door where there was probably a draft of fresh air, and stayed hidden there as 10 firefighters went in and out of the house.