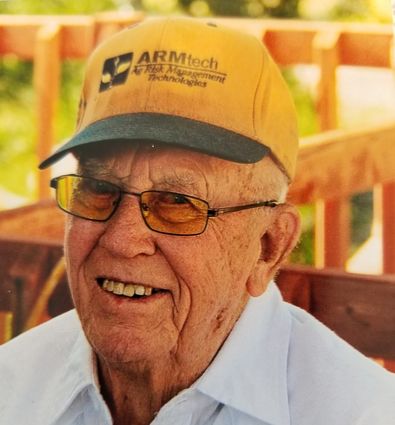 He was born on Aug. 19, 1921 in Marquette, Neb. to Albert and Dora Olson. He joined two older sisters, Dorothy and Gloria, and was later joined by a younger brother, Norman. The family moved to Minnesota when he was four years old and lived on several different farms.

Growing up in Minnesota Royal attended Deer Park School and worked the farm. He learned to drive gravel truck while working for Vern Engstrand and Bill Grubb. He also attended welding school in Minneapolis staying with Ted and Ruby Seestrom. After graduating, he worked in a plant in Alexandria welding airplanes. In July 1942 he joined the Army attending basic training at Camp Roberts, California. He was trained as a Military Policeman and heavy equipment operator. His tour spanned three and a half years, including Washington State and Japan, through the battle of Okinawa. While on furlough he married Rose Larson Dec. 22, 1943.

Following the war, he returned to Rose City, Minn. where he and Rose started a family. First born was Carolyn, then Randy, Linda and Winston. Royal provided for his family by delivering milk, working the farm and owning a garage. In 1961 he moved his family to Conrad, where he was delighted to move his family into a brand-new home. He joined his brother, Norman, and together they operated Olson Brothers Excavating until he retired in 1986. Royal and Rose then retired to their home in Lincoln.

Royal had a great love for the Lincoln area and had built a home there with help from family and friends. It had special meaning to Royal, as it was designed by his son, Randy, and built out of the rough-cut lumber harvested from the property.

During the summer he enjoyed fishing and camping along with traveling in their motorhome to Alaska, Branson, Mo. and many other sites. Other highlights included annual family gatherings in Lincoln for the 4th of July. Winters were spent snowmobiling, running the groomer for the Ponderosa Snow Warriors and hosting family members for the Christmas Holidays. In 2011 Rose and Royal moved to Butte, to live with their daughter, Linda, until his passing on Oct. 13.

Royal was preceded in death by Rose, his wife of nearly 70 years; parents, Albert and Dora Olson; brother, Norman; and sisters, Gloria and Dorothy.

Condolences can be made to Royal's memorial page at www.asperfh.com.