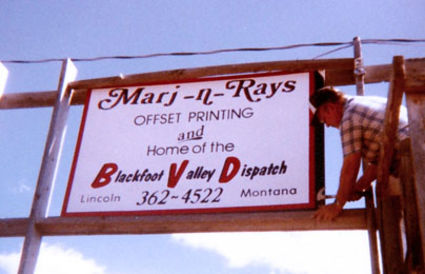 Sporting a series of question marks where the publication's name should be, the front page included the issue's only story - a message from the publishers - and a photo of a then-new Ponderosa Snow Warriors Clubhouse and information on the club's open house and Christmas dinner. The remainder of the issue was almost entirely advertisements, save for an announcement about the VFW Post 3669 Christmas Dinner.

By the second issue, published Dec. 20, the newspaper included considerably more news and had grown from eight pages to 12 and was officially called The Blackfoot Valley Dispatch. The name, submitted by Sharon McDowell, was the winning entry in the "Name the Newspaper Contest." McDowell's suggestion earned her the $5 cash prize by beating out 50 or so other submissions, such as The Blackfoot Valley Bugler, The Pine Post, Lincoln Days with Marj and Rays, Big Sky Roundup, The Jack Pine Weekly News, The Lincoln Valley Prospector and The Snow Flake Press.

The Blackfoot Valley Dispatch was the brainchild of Ray and Marj Heinitz, who saw it as a way to provide businesses and residents with a means to advertise locally, while also serving as a source for news and as an advertising tool for their print business.

The Heinitz's and their son Daryl -who went on to become an English Teacher at Lincoln High School in 1982 – ran a small printing business out of their home near the Lincoln Rodeo Grounds.

According to Daryl, Marj and Ray had worked at the Independent-Observer in Conrad and had been coming to Lincoln to vacation and snowmobile for years. In the 70's they'd built a cabin on what is now (for obvious reasons) Good News Lane. They moved here full time in 1977 and began doing small print jobs, including the programs for the Lincoln Rodeo, the Art Auction and newsletters for both the Snow Warriors and the Blackfoot Trail Blazers using a small press.

"In January of 1980, the Lincoln Chamber of Commerce discussed the publication of a tourist magazine with local ads. During the collection of these ads, Mom and Dad kept hearing encouragement for a local paper that allowed businesses a venue for timely ads," Daryl explained in a 2018 e-mail about the origins of the BVD. "Soon after the BVD was born."

The first issue was originally supposed to be published Nov. 20, but in a recent e-mail Daryl said it was pushed back due to their other print jobs.

"At the time, they were doing only 9"X14" printing due to the size of their press," he explained. "So, for anything larger, they took the layout pages to a larger printing house. Most of the first issues were printed at Gateway Printing in Missoula. After a few months, and after obtaining several other monthly newsletter contracts, they purchased an 11"x17" press to be able to print more jobs themselves."

In short order the BVD operation at their shop on Good News Lane included the 11x17 offset press, phototypesetters and a full graphic arts darkroom.

"For much of this time, I helped with much of the darkroom work but for the most part, the two of them were the 'entire operation,'" Daryl said.

At its outset, the BVD was a free bi-weekly newspaper, funded entirely by advertising revenue, that published between 500 and 1000 issues on the 5th and 20th of every month.

As a news source, the BVD wasn't the only show in town. In 1977 Charlie and Helen Fox began publishing the Lincoln Up To Date, a mimeographed community newsletter co-sponsored by the Lincoln Valley Chamber of Commerce and the Lincoln Senior Citizens Club. The Up To Date concentrated on community service club activities and included some local news and "homey little items," but wasn't set up to print large display ads or photographs. Publication of the Up-to-Date ended in 1986.

During the BVD's first year, there was plenty of local news to cover. Sports and snowmobile club events, Walk and Bike-a thons, church news, local meetings and updates from the Forest Service and the Fish Wildlife and Parks and the like constituted the bulk of the coverage, with some historically noteworthy events interspersed throughout the year.

January 1981 saw the retirement of long-time Lincoln Postmaster Sherman Cook, who had served in the position since he was first appointed as Acting Postmaster by President Dwight Eisenhower in 1958.

In March 1981, Lincoln property owners took a major step toward improving the town's infrastructure by approving the Sewer Bond, with a wide 174-77 vote margin.

In June 1981, the BVD reported on the 25th anniversary of Garland's Town and Country, detailing the history of the business to that point, and July saw the perennial Independence Day Rodeo and Parade and a Chamber of Commerce discussion about the impact of large events on Lincoln.

In August, the community welcomed Ron Brooking as the town's new postmaster and Great Falls Law firm Hartelius and Associates opened a branch office in Lincoln.

At 92 Dr. Elmer "Doc" Smith, who served as Lincoln's doctor for 25 years, was on the front page of the Sept. 5, 1981 issue. He was credited with prompting the community to finally form a medical non-profit to hire a new doctor. That non-profit would go on to become the Blackfoot Valley Medical Services Association.

In October 1981, the BVD reported on the new Lincoln Telephone Company office, as well as the untimely death of Louis and Darline McDowell, who passed away from accidental asphyxiation.

November rounded out the first year of publication as the BVD reported on the arrival of a new Spryte groomer for the Snow Warriors and updates on the Medical Associations efforts. And, lest we forget, the construction of a new toilet for Hooper Park. 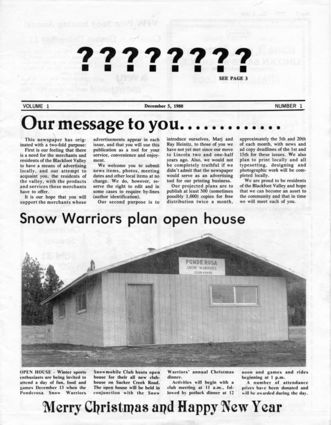 The front page of the first ever issue of the then-as-yet unnamed Blackfoot Valley Dispatch.

Since that first year, the BVD has gone through a number of changes. In ownership. In format. In editorial style and design. And more recently the growth and dominance of social media sites as sources of information and "free" advertising has altered the landscape for local newspapers extensively.

Looking ahead, its hard to see what the future holds for the BVD as it enters its 41st year. After 2020, all bets about the future are off, but many of the issues that have always faced Lincoln remain, in one form or another. Some of them may finally be reaching a critical mass where change becomes necessary. For now, we plan to keep plugging away to provide the Upper Blackfoot Valley with accurate local news, and to provide future generations with a record of what we believe to be a consequential period in Lincoln's history.