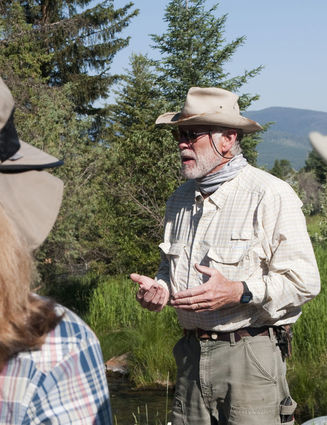 Paul Roos discusses the health of Spring Creek on the west side of Lincoln during a Community Vision field trip in June, 2014.

"If we can come to a broad consensus, that has the potential to give us power. A new kind of power that will let us figure out that maybe we can affect some change. It may take decades, it may happen a long time after I'm gone, but it begins with the first step and that's what this is about."

Paul Roos made that comment in the spring of 2014 while talking about community movement he had been spearheading since the year before. Paul passed away Nov. 10 after a short battle with cancer, but he always had his eye on the future, even if he knew he wasn't going to be a part of it.

Since his death, Paul has been widely remembered as a legendary fly fisherman and guide, and as a passionate conservationist and clean water advocate dedicated to the future of the Blackfoot Valley. What's often overlooked, however, was Paul's passion for the town of Lincoln and his efforts to see the community forge a new future for itself.

Born in 1942, Roos grew up in Lincoln at a time when ranching, timber and mining were the economic mainstays of the Upper Blackfoot Valley. He realized the important role those industries played here, but he also witnessed the damage they could inflict on the valley.

Throughout his life, whether he was living in Lincoln or not, he sought to balance what his daughter Kathy called his foundation: community, education and conservation.

"I think he was trying to figure out ways to incorporate all three of those without compromising one or the other," she said, adding that he wasn't always successful. "Some of what he fought against...he thought it compromised too much of one of those three."

A teacher by training and by trait, in the early 70's, Paul worked as the principal of Lincoln school and was getting Paul Roos Outfitter's off the ground when he joined Cecil Garland to oppose the Anaconda Copper Company's plan to open a massive new mining project in the Mike Horse area. By some estimates, it would have been larger than Butte's Berkley Pit.

In the 90's he again worked to oppose the McDonald Gold Project, a major open pit mine (also compared in scale to the Berkeley Pit) that was in development east of Landers Fork.

Paul Grosfield, Paul's best friend since childhood, said there were a lot of hard feelings at the time.

"That was a tough one, but it was the right thing to do," he said. "That mine...it was square miles of devastation. Those were days when people were hoping to find jobs with the mine... but I think they realized now it wasn't the thing for Lincoln."

In the late 80's, Roos and Becky Garland, the daughter of Cecil and a former student of his time teaching in Lincoln, worked together to form the Big Blackfoot Chapter of Trout Unlimited.

"We were arm-in-arm during that time (but) it was hard during those first couple years to not call him Mr. Roos," said Becky, who also worked with him during the development of the Blackfoot Challenge in the early 90's. "It's just all the conservation things we did or all the organizational things we did. We were just so like-minded that we became very good friends."

Through it all, Paul developed a habit of listening to all opinions, while remaining respectful even in disagreement that became a hallmark of his personality.

"Everyone would stop and listen to what Paul had to say. He had such a unique way of presenting; speaking slowly and speaking from the heart. That was masterful," said Lincoln District Ranger Michael Stansberry, who met Paul in 2015 during his second day on the job. "But at every meeting I watched him listen. And that's where the balance came in. Understanding what other people had to say and what their concerns were was pulled into whatever message he had."

That skill helped him as he brought people together in 2013 to find a way forward for Lincoln, in the face of economic stagnation and public land policies that seemed disconnected from the needs of the community.

For a brief time that effort was called Community Vision.

Community Vision had its roots in the Lincoln Restoration Committee, the successful collaborative effort that developed the Stonewall Vegetation project and contributed to the success of both the Winter and Non-winter Upper Blackfoot Travel plans.

Paul's nascent Community Vision idea broadened the scope from forest restoration to encompass more community and economic development. Since those early meeting in 2013 and 2014, it's evolved into much more, inspiring or supporting most of the projects that are now shaping Lincoln's future.

"I think he was really a catalyst," said Jordan Reeves, the Crown of the Continent conservation program manager for the Wilderness Society. Reeves began working with Roos in 2015, when he took over for Meghan Brizell. Brizell helped Roos lay the groundwork for the collaborative effort through a series of conversations in 2013.

"He and Brent Anderson and Bill Cyr...had been working together on the Lincoln Restoration Committee. They felt that collaborative approach was important and that they ought to expand it to tackle more stuff and bring in more people to take on different opportunities and challenges for Lincoln. Without Paul, personally I don't think any of that would have moved forward," Reeves sad

In an e-mail to the Blackfoot Pathways: Sculpture in the Wild board regarding Paul's passing, Kevin O'Dwyer recalled how he and Rick Dunkerely sat down with Paul and his wife Caroline, who passed away in 2015, to talk about the idea of a sculpture park in Lincoln. His support for the idea prompted them to take the proposal out to the wider community.

"Sculpture in the Wild came in and that gave him another voice to say 'you know, guys, this is really a good idea,'" said Garland, the BPSW president. "He and Carolyn just jumped all over it and saw the value of the education part of it, and history sharing and the issues, opening things up in a different way."

Roos threw himself behind the project as the head of the fundraising committee.

While Community Vision was gathering steam, Rick Graetz from the University of Montana visited with a presentation that looked at Lincoln's unique history, geography and location. The presentation inspired the creation of the Base Camp Group to explore ways to use those features to bolster the community's economy.

Despite being a "wilderness guy," Reeves convened the first Base Camp Group meeting with Roos' support .

In 2016, the Base Camp Group, with help from a Wilderness Society grant, hired Headwaters Economics to complete an economic study for Lincoln. The following year, the LOR Foundation provided Lincoln with a $100,000 grant to help Lincoln improve Its economic outlook. That grant in turn allowed the Base Camp to evolve.

"Once we were able to sort of get legs and get funding and stuff, it was really sort of Paul's suggestion that we change the name to Envision Lincoln," said Karyn Good, the community coordinator for Envision Lincoln. Although she can't prove it, Good suspect Paul's influence played a role in securing the LOR grant.

"The other group that spawned out of that is the vegetation management group. That was definitely Paul," Reeves said. "He saw that noxious weeds were a real opportunity to bring people together because everybody hates them."

Community Vision itself morphed directly into the Upper Blackfoot Working Group – now the Lincoln Prosperity Group. The group represents the culmination of that original community vision that sought to find a way to overcome the status quo in public land management, which wasn't benefitting anyone.

Over the past five years, the group developed a collaborative legislative proposal for the management of some 200,000 acres of public lands that surround Lincoln. The group is working to develop wide public support of the plan before submitting it to the state's congressional delegation, with the ultimate goal of seeing it signed into law.

Perhaps Paul's most personal achievement combined his love of the Blackfoot River and the community of Lincoln. In 2015 he purchased 9.5 acres just south of the Stemple Pass Road bridge for use as a park and river access. "It made no sense to me. Here we are, Lincoln, and we have a river going through and we have spring creeks going through and the kids can't get to the water," he said at the time.

Reeves said Paul saw such work as a progression over time. "We do the economic report, we get some recommendations. Those become projects and we can then turn around and apply for more money for a grant, I think that's what you see now. The Montana Main Street, the implementation for the trails plan. Everything builds one step at a time and he was always thinking about two, three steps ahead."

Another important kind of progression was getting people involved in the community to "just doing right by the place you live."

"I never really realized that before talking to Paul and spending time around him," Good said. "I just always kind of existed in the towns I lived in. But he really had a way of inspiring people, making them feel like they had something to offer, something to give." 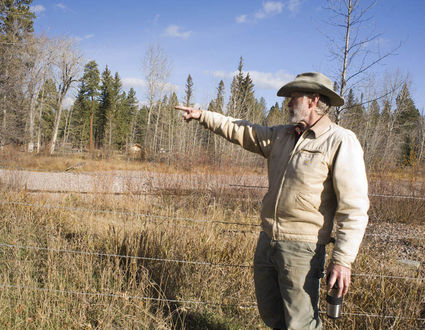 Paul Roos points out a stretch of fence he removed near the Stemple Bridge in 2015, shortly after purchasing 9.5 acres near the bridge for use as a public park. The park, now under the ownership of Five Valley's Land Trust, became a reality in 2017.

Kathie said her father was good at starting thought processes and at providing the vision for what he hoped to achieve but knew there were people belter suited to carry those visions forward. "He had bigger ideas and the passion behind it but needed a lot of help to go from there. Thank God he had amazing people around him."

For his efforts to preserve the Blackfoot watershed, Paul was inducted into the Montana Outdoor Hall of Fame on Dec. 5.

"I'm just so thankful he knew ahead of time and he was able to share it and we were able to tell him congratulations," his daughter Kathie Roos said. "It's just a real honor for him to be included with the names, the other people already inducted and of course the people being inducted this year."

Despite the well-earned accolades, Kathie hopes people will see more than the icon her father has become and will remember the man he was and the effort he put into those things that mattered to him.

"The worst thing you can do is make him like a saint. Everybody knows there are no saints out there, but he worked hard at trying to work with all, and to see different perspectives," Kathie said. "Gosh, that's the only way we're going to get anything done."