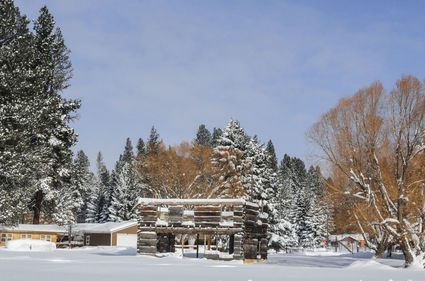 Partially re-assembled on the UBVHS property on Main Street, the Matt King House waits for spring for work to continue.

The Upper Blackfoot Valley Historical Society received a grant from the Lincoln Valley Community Foundation in January to continue reconstruction of the Matt King house.

The Matt King project has faced delays over the last two years. In the fall of 2019, an early snowfall stopped worked in September, while COVID concerns slowed work through 2020. Board members at the last UBVHS meeting expressed optimism that the reconstruction of the house will be completed during 2021.

In addition to the Matt King house, the UBVHS maintains several other historic buildings, including several on Hi-Country property west of Lincoln. Some of these buildings were damaged slightly during the recent wind storm, although one building, Stoner's Cabin, saw notable damage. The building, which had primarily been used for storage, had existing structural issues.

Board members discussed the future of the building, which may have to be taken down.