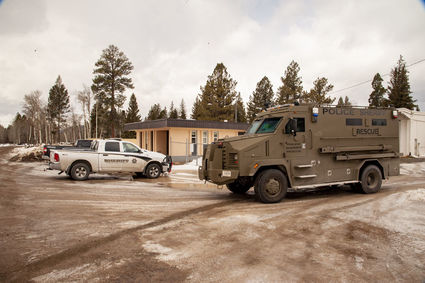 The SWAT Team heads out from the Lincoln substation for the site of the standoff on Highway 200 after receiving new information on negotiations.

LINCOLN - Lewis and Clark County deputies arrested a Lincoln man Tuesday morning, March 2, and charged him with two counts of assault with a weapon after an extended standoff at his home along Highway 200, four-and-a-half miles west of Lincoln.

Gregory Scheele, 60, surrendered peacefully to deputies at 11:30 a.m. after about four-and-a-half hours. The standoff led to the closure of Highway 200 for about three hours as Sheriff's Office personnel negotiated with Scheele to surrender.

According to Undersheriff Brent Colbert, Scheele first contacted the dispatch center the evening before with concerns about a complaint he'd filed with the Sheriff's office. He called again at about 5:30 a.m. and was reportedly very angry. Colbert said they heard gunshots while on the call, which prompted the deputies response to Scheele's residence.

"We came up here and ended up in a standoff with (Scheele). He was in the residence by himself."

After deputies arrived, they heard additional gunshots, which led them to close the highway for the safety of both the public and law enforcement. Colbert said it wasn't clear if Scheele was shooting at the deputies or in another direction. He said Scheele reportedly had access to several weapons.

The Sheriff's Office asked people to avoid the area, and residents near the 6300 block of west Highway 200 were advised to shelter-in-place during the operation.

The standoff involved five on-shift deputies and prompted deployment of the joint city-county SWAT Team, their Bearcat armored vehicle and a negotiating team.

"They all did an excellent job. Our negotiators talked with Mr. Scheele for quite some time and got him to surrender and come down to law enforcement without incident," Colbert said. As part of the negotiations, they enlisted the aid of Aaron Birkholz, who has developed a rapport with Scheele over the last five years. Although Birkholz serves on the Lincoln Volunteer ambulance and Lincoln Fire Department, he said he wasn't acting on behalf of either organizations, but simply as a friend Scheele trusted.

"I'm glad he put his trust in me and believed I wasn't lying that no one was going to hurt him," Birkholz said.

Colbert was unsure of what exactly led to Scheele's actions, although an investigation of the incident is underway.

Neighbor Doug Ingalls told the BVD Scheele had grown frustrated with a perceived lack of action by law enforcement on complaints he'd filed. He indicated this may have been a last-ditch effort to bring attention to those issues. Birkholz said Scheele is normally a very level-headed person, but events in his life seemed to have led him to a breaking point. 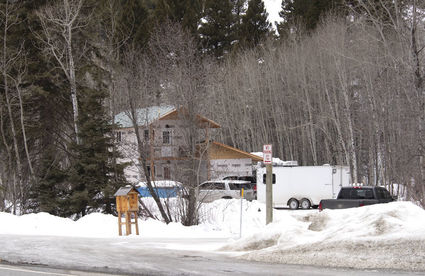 Vehicles belong to Sheriff's Office investigators fill the driveway of the Scheele house.

Colbert said to his knowledge, Scheele had no prior arrests and isn't someone the Sheriff's Office has had problems with in the past. Scheele reportedly has a number of health problems, but Colbert said there was no indication whether he had any mental health issues or was under the influence of any substances. Regardless, Colbert did not believe the standoff was intended to be a "suicide by cop."

Colbert thanked Lincoln Volunteer Fire Rescue, the Montana Highway Patrol and the Montana Department of Transportation for helping with traffic control while the highway was closed.

"They helped us a ton by having signage out and actual people out, talking to motorists as they came down, making sure they knew what was down the road," he said.