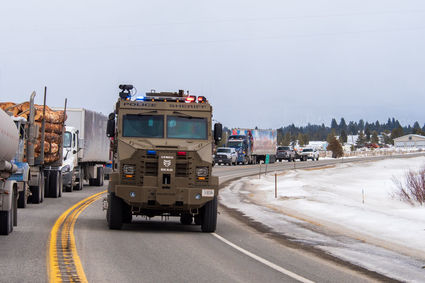 Gregory Scheele, 60, has been charged with two counts of assault with a weapon after making what deputies perceived as threats against two individuals - identified in court documents only as 'C' and 'R.'

Deputies arrested Scheele at 11:30 a.m. March 2, after he surrendered peacefully following a nearly five-hour confrontation at his home in the 6300 block of west Highway 200, four-and-a-half miles west of Lincoln.

According to the Probable Cause affidavit filed by Sheriff's Sgt. Patrick McDuffie, Scheele originally called the Sheriff's Office Sunday, Feb. 28 to report his concerns about property he had loaned to 'C' and 'R.' The affidavit indicates they came to an agreement that a deputy would look into his concerns March, but Scheele reportedly called 911 again Monday evening, March 1 to ask why a deputy hadn't responded. McDuffie indicated he discussed several ways they could handle the situation, but that Scheele was unreasonable, angry and wouldn't agree to the proposals. Scheele then reportedly called 911 ten times over a two hour period, demanding a deputy respond or he would deal with it himself. In the affidavit McDuffie noted that Scheele had a terminal illness that had been treated with brain surgery and had been on hospice.

McDuffie and Deputy Tony Galahan reportedly met Scheele at his home at about 11 p.m. March 1. He spoke to them from the second story balcony of his home but refused to come to the ground floor. He was said to be wearing a pistol in a shoulder holster at the time, but later removed it. During the calls and while speaking to deputies, Scheel claimed he had "nothing to live for."

In the affidavit, McDuffie said he and Galahan met with 'C' and 'R', who told them they were concerned for their safety and believed Scheele would follow through on his threats.

Five deputies were on hand in case Scheele left his residence, but by 1 a.m., with no movement at the house, four of them returned to Helena.

Scheele again called 911 at 5:40 a.m. to once more voice his concerns. During the call, he reportedly fired off several gunshots, which prompted several deputies to respond to his residence.

"We came up here and ended up in a standoff with (Scheele). He was in the residence by himself," Undersheriff Brent Colbert said Tuesday.

After deputies arrived, Scheele came out of his house, saw the deputies surrounding his home and went back inside.

Colbert said deputies later heard additional gunshots, which led them to close the highway for the safety of both the public and law enforcement. Colbert said it wasn't clear if Scheele was shooting at the deputies or in another direction, but he said Scheele had access to several weapons.

The incident closed Highway 200 for about three hours as Sheriff's Office personnel negotiated with Scheele. They asked people to avoid the area, and told nearby residents to shelter-in-place during the operation.

The standoff involved five on-shift deputies and prompted deployment of the joint city-county SWAT Team, their Bearcat armored vehicle and a negotiating team.

Doug Ingalls, a neighbor of Scheele's, was given permission to leave his home to go to the Lincoln substation. Ingalls, who had only moved to Lincoln recently, said he had only known Scheele for about three weeks at that time, but described him as "a good Christian man." Ingalls, who had a conversation with Scheele the night before about an ongoing family issue that had him distressed, volunteered to go in, talk to Scheele and bring him out. Ingalls doesn't believe he ever really intended to hurt anyone.

Although Colbert turned down Ingalls' offer, he turned to Aaron Birkholz, who has known Scheele since he began building his house here about five years ago. Although Birkholz serves on the Lincoln Volunteer Ambulance and Lincoln Volunteer Fire Rescue, he wasn't brought in on behalf of either organizations, but simply as a friend Scheele trusted.

Like Ingalls, Birkholz doesn't believe Scheele really planned on hurting anyone, nor does he think he intended 'suicide by cop.'

"He's very level-headed," Birkholz said. "Just with everything going on in his life, I think he hit a breaking point."

Although the incident involved the SWAT team, which Sheriff Leo Dutton said many people believe means such encounters will end violently, he said their job is really to help affect an arrest without anyone getting hurt, and Colbert credited the negotiating team for the ultimately peaceful resolution. "They all did an excellent job. Our negotiators talked with Mr. Scheele for quite some time and got him to surrender and come down to law enforcement without incident."

Birkholz, who accompanied the SWAT team to Scheele's home, credited the LCSO negotiators for the job they did.

"The level of calm they had was amazing, and they were willing to work with me as a friend of Greg's," he said, adding it really helped to de-escalate the situation. "I'm glad he put his trust in me and believed I wasn't lying that no one was going to hurt him."

Colbert said to his knowledge Scheele had no prior arrests and isn't someone the Sheriff's Office has had problems with in the past. Despite Scheele's health problems, Colbert said there was no indication he had any mental health issues or was under the influence of any substances. 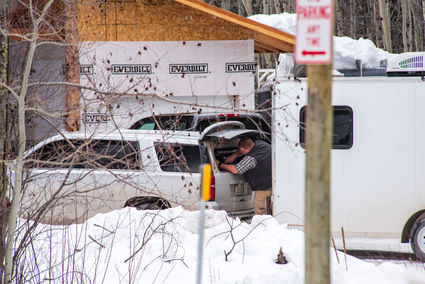 Although neither 'C' nor 'R' appear to have been in the immediate vicinity of Scheele's home during the standoff, Colbert explained his actions nevertheless warranted both Assault with a Weapon charges. He explained that under state law, if a person makes threats toward someone who has a reasonable belief that the person making the threats has access to weapons, is willing to follow through on the threats and has the ability to get to them quickly, that person can be charged with assault with a weapon. Since both 'C' and 'R' both indicated they had such concerns, it led to two charges.

Colbert thanked Lincoln Volunteer Fire Rescue, the Montana Highway Patrol and the Montana Department of Transportation for helping with traffic control while the highway was closed.

Dutton, who had a prior commitment and wasn't able to be on hand, said he appreciated Birkholz's contribution to the peaceful outcome. He also believes the LCSO's efforts to concentrate on leadership training really paid off by ensuring everyone involved knew the job of the person above him. He noted in particular Colbert's handling of the situation in his absence. "Leadership is not just something we talk about, its something we practice." he said.