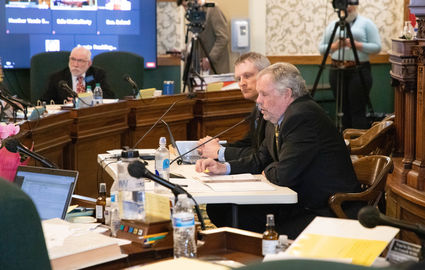 Sen. Bob Keenan, R-Bigfork, speaks on the Department of Health and Human Services portion of House Bill 2 -- the state budget bill -- during a meeting of the Montana Senate Thursday morning, April 8. The budget is the only bill the Legislature is constitutionally required to pass, and it appropriates more than $12 billion to state agencies and programs over the next two years.

The state budget is on the move again in the Montana Legislature after the Senate passed in on a 33-17 vote Thursday, making few changes and defeating an attempt to end Medicaid expansion in the process.

House Bill 2 is the only bill the Legislature is constitutionally required to pass...