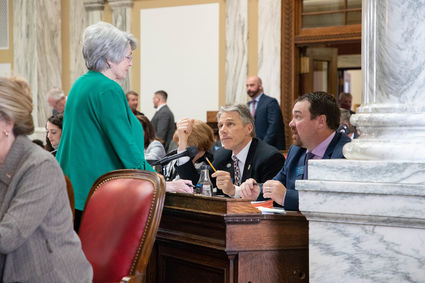 Rep. Sharon Greef, R-Florence (left), Rep. Ed Hill, R-Havre (center), and Rep. Josh Kassmier, R-Fort Benton, converse before the start of a Montana House of Representatives floor session Friday. The chamber voted on 44 bills throughout the session as lawmakers look to close business for the 2021 Legislative Session in a matter of days.

As the Montana Legislature nears the close of its biennial business, Republican lawmakers are mounting a case against the judicial branch and the state Supreme Court with accusations of judicial bias and improper record keeping, while Democrats call the inquiry a "witch hunt."...