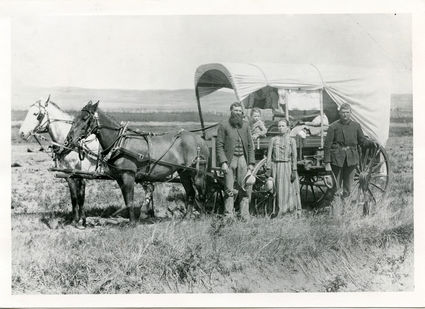 The Samuel "Dick" Tuck family as they pass through South Loup Valley in Custer County, Nebraska in 1890.

These two photographs bookend a journey.

The first has been seen by possibly millions of Junior High and High School students over the years. An image from the National Archive, it has became an iconic image of post-civil war westward expansion and has appeared in several U.S. history textbooks.

The second image is probably known only to the readers of Gold Pans and Singletrees. Together, they show both ends of the Tuck family's journey from Litchfield, Neb. to Lincoln, Mont.

The image shows, from left to right, Samuel E. "Dick" Tuck, Maude Tuck, May Tuck, and Jim Roberts, Dick Tuck's cousin, while two of the Tuck children, Leona and Ira slept in the wagon.

According to Tuck's grandchildren in 1993, the family spent the winter in Helena before completing their trip to Lincoln in 1891.

The second image shows the Tuck clan upon thier arrival in Lincoln 130 years ago. According to a note on the back of the original photograph, they are at the Lincoln Hotel. The building behind them is possibly George Miller's cabin, where the Lincoln post office was relocated in 1891. Charley Mathews later built the original hotel adjoining Miller's cabin. Much of the current town of Lincoln sits on Miller's original homestead.

Names written on the bottom of the Lincoln photograph only identify members of the Tuck family. From right to left, it appears to be Jim Roberts, holding the horse (which appears to be the same gray hitched to the wagon in the Nebraska image), five- year-old Ira Tuck, Dick Tuck behind the fence, two-year-old Leona (Onie) Tuck, and six-year-old Maude Tuck. Mae Tuck appears to be just to the left of the woman standing next to Maude. The names of other family in the Lincoln photo is illegible, except for what seems to be the last name of Roy.

The Tuck family went on to homestead in Liverpool Gulch north of Lincoln. 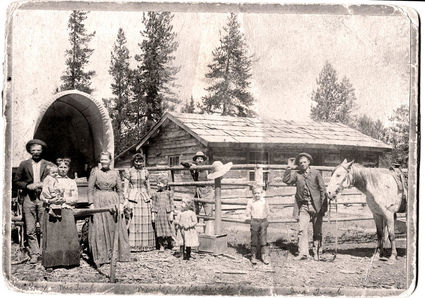 The Tuck family on their arrival in Lincoln in 1891.

According to Gold Pans and Singletrees, " a son Roy was born to the family in 1893. He died at Liverpool in 1913 and is buried there." Mae tuck left Dick in 1900 and moved to Helena. Dick passed away in 1928 and is buried beside Roy above the big meadow, at the base of the mountains between Liverpool and Park Creeks.

The Tuck family sold the homestead in 1942 to Bob Dunlap. In turn Dunlap sold it to Ben Shubert, who is buried on the homestead next to Roy and Dick. Shubert's heirs sold to Dr. and Julie Andes, whose family still owns it. The Lincoln image appeared in Gold Pans and Singletrees in 1993, but by 2018 it had found its way to an antique store in Missoula. Fortunately a community member saw it, recognized it's significance and purchased it to donate to the Upper Blackfoot Historical Society.