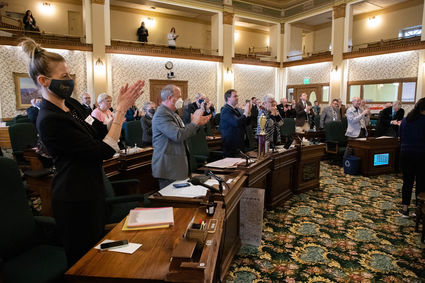 Members of the Montana Senate cheer after Senate President Mark Blasdel, R-Kalispell, concludes his farewell address Thursday. The Legislature adjourned for the session after passing a balanced budget and narrowly defeating an eleventh-hour attempt to rewrite a significant portion of the recreational marijuana implementation bill the body passed just days earlier.

The 67th Montana Legislature adjourned on Thursday, April 29, following a week filled with policies brought back from the dead and capped by a failed high-stakes gamble by conservative Republicans to rewrite a major portion of the recreational marijuana plan passed just days e...