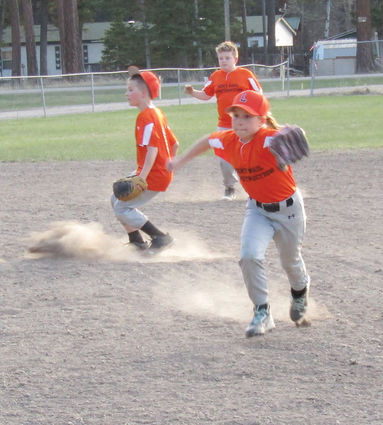 Eight year old Preslie Vogl races for first base to beat the Helena runner and tag him out while pitcher Myles Greany reacts to the pop up fly.

Led by the pitching expertise of Henry Smith and Myles Greany, the newly-formed Bent Nail Construction team gave the visiting Great West Engineering team from Helena a run for their money in Little League action on May 6th in Hooper Park.

The score at the close of innings was 11 – 4 in favor of Helena, but Lincoln played well and had loaded up the bases several times.

Almost all of these litt...