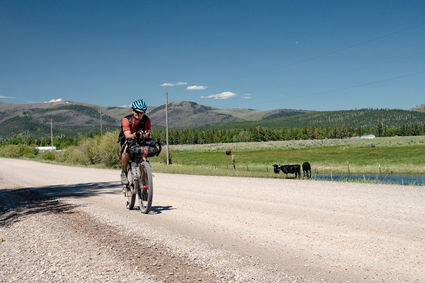 Jason Marley takes in the scenery as he heads south out of Lincoln along Stemple Pass Road Sunday afternoon.

After a coronavirus-related hiatus last year, an abridged Tour Divide once again brought cyclists racing down the Great Divide Mountain Bike Route through the Blackfoot Valley, en route to the Mexican border.

With the Canadian border still closed and travel restrictions still in place for many countries due to COVID-19, this year's Tour is a 2450-mile, border-to-border race called the Great Divide Classic. About 300 miles shorter than the regular Tour Divide, it follows the Great Divide Mountain Bike Route from the border at Eureka to Antelope Wells, N.M.

According to Tour Divide organizers, the change pays homage to the GDMBR, Mike McCoy and John Stamstad, who designed the route, and to the original Great Divide Race that evolved into the Tour Divide.

This year's race saw 94 riders, about half the normal number, but for Tour Divide Supporters in Ovando and Lincoln, it's return was a welcome one.

Racers left the border Friday, June 11 at noon and early race leaders Brendan Heinig, Jay Petervary and Kire Nilhon arrived in Ovando by around 4 p.m. Saturday. By about 8 p.m. they had reached Lincoln.

Kathy Schoendoerfer, owner of the Blackfoot Angler and Ovando's de facto Tour Divide ambassador, said both the riders and local business owners are thrilled that the race made a comeback this year.

Her reputation for posting updates and for photographing as many riders as she can prompted Andy Roberts of Florida to quip that he "heard if you don't take my picture I don't really exist."

"It's been so much fun. Half of these people I've met before and they're just coming back again," she said. It was like old home week sometimes."

Returning riders this year included 2016 Libertarian presidential candidate Gary Johnson, who was taking part in his fourth straight ride. Schoendoerfer described him as being "in such a good mood," particularly by comparison to his 2016 ride, which she said was marked by continual press coverage. Now 68, he joked that he might win it after a few more years, since he gets faster each time.

Jason Marley made it to Lincoln Sunday afternoon, about half a day behind the race leaders. The return of a race this year presented him with a rare opportunity. A physician at Bozeman Deaconess Hospital, he's ridden sections of the route, and has wanted to take part in the Tour Divide for about ten years but hasn't had the chance.. This year, he finally got the three weeks off he needed for the border-to-border ride. "This may be it for a while," he said. "I'm not sure when I'll be able to get another three weeks off."

Although Lincoln historically hasn't had a stellar reputation among cyclists, Laurie Richards at the Wheel Inn has been working for the last four or five years to change that. At the Wheel, she and her husband Doug provide a support tent for cyclists. She said they got it set up "in the nick of time" this year, although winds Sunday took it down and nearly blew it away entirely. 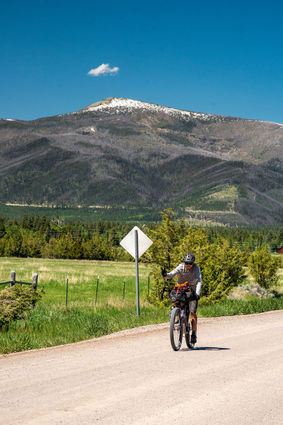 Ryan Brink of Durango, Colo. flashes a peace sign as he heads south out of Lincoln along Stemple Pass Road Sunday afternoon.

During her time as President of the Lincoln Valley Chamber of Commerce, Richards became an advocate for improving Lincoln's status among both cyclists and hikers. She thinks more people here are now also seeing the value they bring to town and believes this year more people are cheering on the Great Divide racers.

"I think it's huge. It's so important for the whole town of Lincoln," she said.

She noted that a group of older cyclists, on a tour from Seattle to New York, added to the mix as they began passing through Lincoln at the same time as the Great Divide racers.

With this years' shortened roster of riders and shortened route, all the Great Divide racers will likely be through Lincoln by this weekend, but following a year of COVID restrictions, Lincoln could expect to see steady traffic from cyclists and hikers throughout the summer.