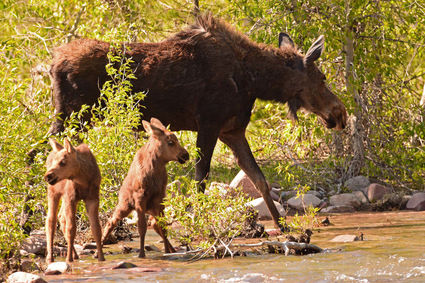 With the celebration of Mother's Day in May and Father's Day in June, Lincoln residents can look forward to the birth of ungulate babies during those same months.

White-tailed deer, elk, and moose, which all range in the Lincoln area, give birth to fawns and calves in late May and early June. Deer fawns and elk calves are both born with spots, while moose calves are solid-colored at birth.

The Montana range of white-tailed deer, Odocoileus virginianus, covers the entire state and most of the country. They can also be found in Canada, Mexico and parts of South America. These deer change color in the summer, turning a reddish-brown that fades to gray-brown in the winter. The bucks grow antlers that tend to average three to five points, which are shed in December or January. This species tends to occupy a small home range, according to the Montana Field Guide and is described as "nocturnal and secretive." Does typically give birth to one fawn during their first breeding and twins in subsequent years. Newborn fawns are generally six to eight pounds. Their spots will fade over the summer and be completely gone by winter.

While elk, Cervus canadensis, historically ranged across all of Montana, their year-round range now occupies the western, central, and southern parts of the state. Elk are brown with darker coloring on their head, neck, and legs. They have lighter coloring on their rumps, which explains the Shawnee name for elk, Wapiti, which means "white rump." Bulls grow antlers with five points on average, in addition to the main branch. They shed these in March or April. Elk may have migratory seasonal ranges, often moving to higher elevations during the summer. Elk calves can weigh up to 40 pounds at birth, and their spots usually fade by the end of summer. Elk rarely birth twins.

Several cow elk keep watch over a large group of elk calves near Alice Creek in 2018.

Moose, Alces alces, range across most of Montana, minus the central-eastern portion of the state. They have dark brown to black coats, and bulls grow large, flat antlers. Like deer, they shed these antlers in December or January. Moose are impressive swimmers, able to submerge for up to four minutes and swim miles at a time, according to the Montana Field Guide. Moose calves generally weigh about 30-40 pounds at birth. Younger cows tend to give birth to single calves, while older cows more regularly birth twins.

Although fawns and calves may look unprotected or orphaned, their mothers are usually nearby, according to Montana Fish, Wildlife and Parks.

"It's important to remember that Montana Fish, Wildlife & Parks no longer accepts, holds or rehabilitates moose, deer, elk and most other animals," the FWP wrote in a March press release. Baby animals can be dangerous, and in the case of moose, the cows may be particularly protective of their calves.

This summer, take care near fawns and calves by admiring from afar and heeding the FWP guideline: If you care, leave it there.