Collision at Helmville Bridge sends one to hospital 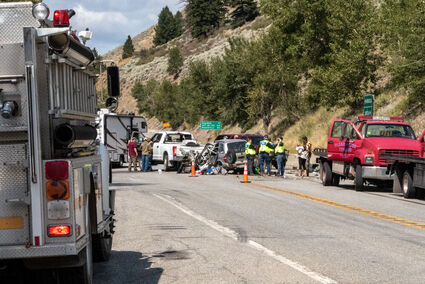 A mangled SUV and the truck it hit sits in the middle of Highway 200 as traffic is routed around the accident scene. Despite the catastrophic damage to the vehicle, the SUV driver survived the accident.

The driver of a westbound Kia SUV found himself on a life flight to St. Pat's Hospital in Missoula Friday, Aug. 20, after rear-ending a pickup truck at the intersection of Highways 200 and 141.

The collision, which was reported at 10:40 a.m., demolished the driver's side of the SUV and caused the vehicle to catch fire.

Helmville Quick Response Unit, Ovando Fire and EMS and the Lincoln Volunteer Ambulance all responded to the scene, but the first people to arrive were firefighters from New York.

Ovando emergency responder John Valiton said four members of an FDNY incident management team came upon the accident while enroute either to or from one of wildfires burning in the state and began attending. The team, which included EMTs (and by another account both a paramedic and a nurse), began attending to the injured driver.

"By the time we got there he was already out of the car and being treated," Valiton said.

"We have a lot of firefighters here helping with all the fires, seeing them pass through," said Montana Highway Patrol Trooper Daniel Kalbacher, who arrived from Helena after the New York firefighters had left. "They're obviously going to jump in and help when need be. At the end of the day, we're all first responders and we help the public."

Valiton said the driver of the pickup that had been hit pulled the SUV driver from the vehicle, which was on fire. The pickup driver told Kalbacher a passerby used a fire extinguisher to put out the fire before it spread.

Although the SUV driver sustained serious injuries, including possible internal injuries, and was flown to Missoula, Valiton said it didn't appear his injuries were immediately life-threatening.

Kalbacher said the SUV driver was wearing his seatbelt but it's unclear why he didn't see the pickup was waiting to make a left-hand turn onto Highway 141. 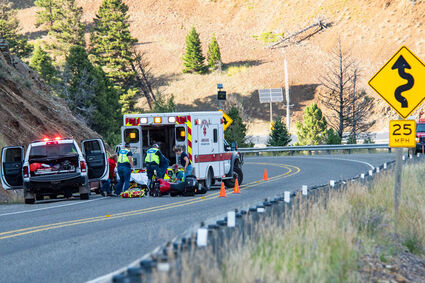 in a separate incident, Lincoln EMTs prepare to load a motorcyclist who hit a deer Sunday evening, Aug. 22, into the ambulance for the trip to Benefis in Great Falls.

Valiton noted that most accidents in the area are sideswipe accidents, often the result of line-of-sight issues caused by a highway sign that obscures the view of eastbound vehicles as they approach the intersection.

The occupants of the pickup included a husband and wife, two very young children and two dogs, who came through the accident unscathed.

"That just goes to show the importance of always wearing your seatbelts and always using child restraints," Kalbacher said.

In a separate incident Sunday evening, the Lincoln Ambulance and first responders attended to a motorcyclist who hit a deer, just east of the top of Roger's Pass.

The motorcyclist was wearing a helmet at the time of the accident, but nevertheless sustained injuries that required a trip to the hospital in Great Falls.