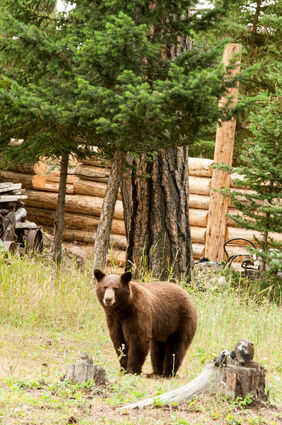 A young black bear ambles through Lincoln in 2016.

Last week saw some significant bear activity ln Lincoln's west side, with several bear sightings and encounters on the south and west edges of town, areas that are close to the Blackfoot River and the wetlands southwest of town.

According to Facebook posts last Wednesday, a large black bear sow with at least on cub has been knocking over trash cans in the area around First Avenue South and has reportedly even charged people.

Lincoln Game Warden Ezra Schwalm, who returned from a trip into the backcountry over the weekend, said he's heard about the issue with the sow and cub, and planned to deal with the calls he received this week. He said he's heard much of the problem stems from garbage issues.

He said he doesn't know if the problems are stemming from newcomers who aren't used to living in bear country, or if its simply complacency among longer term residents who just haven't had any issues until now. He suspects it's a combination of both. He said Lincoln has been pretty quiet for some time in terms of problem bears.

Schwalm said he's never trapped and relocated a bear that didn't end up dead within about a week.

"What a lot of people don't understand is the whole saying 'a fed bear is a dead bear' is very true," he said. "If people don't want to see a bear die needlessly, put away your garbage, take your birdfeeders down, put your pet food away, all that stuff."

A limited number of bear-proof trash cans are available at the Lincoln Transfer station as a short-term solution with an emphasis on short term.

Misty Edwards said Lewis and Clark County has ten such cans at the Lincoln Transfer Station, but they are only for use "where known issues have occurred or where bears have been seen" and will be swapped out for regular cans once the bear leaves or is removed.

"Customers of the district are encouraged to be responsible with their garbage in the standard containers that Republic issues, and put their containers away between weekly pickups," Edwards said in response to an inquiry about them following Lincoln Government Day.

Another issue likely to cause conflicts with predators, in this case lions, is the feeding of deer. Schwalm said they had the issue somewhat under control for a while, but he believes it has increased again. As with the bears, it may be due to a combination of newcomers who don't realize just how many predators live in the area and an overall sense of complacency.

"We haven't had a lion sitting on a deer carcass in somebody's woodshed in a decade," he said.

The issue has become enough of a concern that it came up at the Oct. 1 Government Day meeting.

Lewis and Clark County Sheriff Leo Dutton, who learned about predator attacks in his dual role as Coroner, explained that Mountain lions have evolved a fang-width that perfectly match the vertebrae of whitetail deer

"If you started getting a bunch of these type of deer, you're going to get mountain lions. They're the natural prey," he said. "So, if you're feeding them, you might as well go out at night and go 'here, kitty, kitty, kitty.' You're inviting them when you do that."

Or as a wildlife manager once put it, 'if you want a mountain lion in your yard, feed the deer.'

Zach Muse, president of the Upper Blackfoot Community Council, added that whitetail themselves can be dangerous, particularly in the spring, when does tend to protect their fawns, and int the fall when the buck start rutting. "They can stomp a mudhole in you," he said.