Santa's Workshop gets a hand from Optimist Club 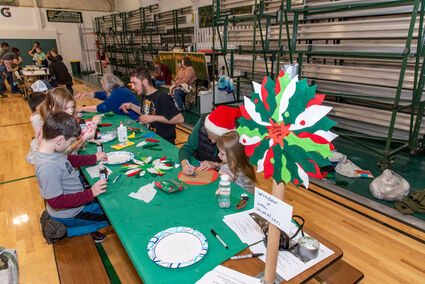 Nearly 100 kids and their families descended on the Lincoln School Gym to make crafts and holidays gifts at the annual Santa's Workshop Dec. 4.

Hosted by the Lincoln Council for the Arts each year, students from across the Blackfoot Valley are invited to participate in the event, which usually has a $5 fee per student. Students are welcomed to the event, whether they can pay the admission fee or not, but this year a local organization paid the fees or all the students, and they hope to continue to do so in coming years.

The Optimist Club raises money to support the needs of children in their community and surrounding areas, and the Blackfoot Valley Optimist Club thought Santa's Workshop would meet that mission.

"I'd seen the advertisement that there was a $5 charge per kid, and I talked to Shayne [Lindsay] and brought it to the club. Everyone was all for it. There shouldn't be a cost to the kids. We're trying to raise money to help them. To me, that's a perfect way," said Chad Sutej, who is a member of the BVOC.

"We have never turned anyone away, but this way made it so much easier," said Jill Frisbee, who organizes the event each year, adding, "Chad called me and said, 'So, what would you think of this?' and I said, 'Oh, that'd be awesome.'"

Frisbee has been helping organize the event for over a decade and said she gets lots of help from family and volunteers. Derek Perez and Gabe Harris from the school also help to set up all the tables and take them down after the event.

"I just have a good core group of volunteers. It's kind of surprising how many volunteers come to me and ask me. And my daughter helped me quite a bit and my son," Frisbee said.

Kim Cox was a new volunteer at Santa's Workshop this year and said she's looking forward to returning next year.

"I caught Jill at work and asked her if she still needed help and she did. I was so excited," said Cox, adding that the best part was watching the kids' excitement and getting to be crafty with them.

The event also featured visits and photos with Santa.

Frisbee said they'd expected about 75 students at the most to attend the event, and that 93 showed up. Luckily, she had extra supplies for most crafts, so students were still able to participate. She's already started organizing ideas for next year's event to her Pinterest boards. 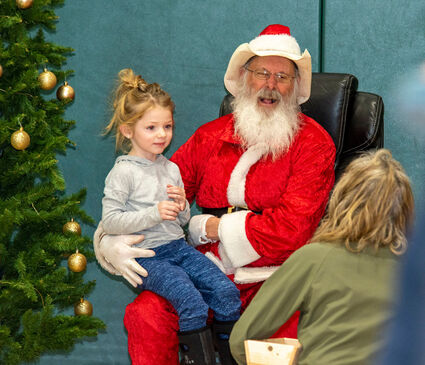 "I actually have a Santa's Workshop board, a general one that I put all my ideas in, and then each year I pull out some and make a yearly one so that I don't repeat the same thing. I try to pick out something the kids could give their dad or grandpa. I think next year we're going to try a couple preschool crafts," said Frisbee, noting that this year she saw a lot of the younger students.

In addition to the crafts coordinated by the Lincoln Council for the Arts, local groups also help with crafts of their own. While these groups rotate each year, Frisbee noted that the American Legion and Blackfoot Valley Bible Church always sponsor a craft.