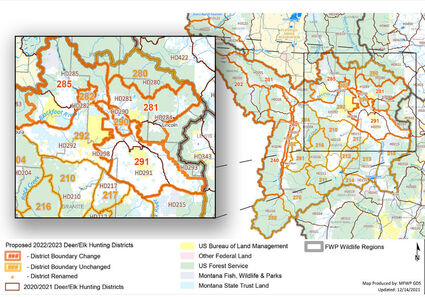 The recent effort to simplify hunting regulations in Montana has sparked debate around the state and could bring significant changes to boundaries of the deer and elk hunting districts in the Lincoln area.

Hunters in Lincoln had the chance to discuss the proposals at a season setting meeting at Lambkins Wednesday, Jan. 5.

Led by Randy Arnold, the regional supervisor for Region 2, the meeting drew only a few participants. Although the meeting also touched on the elimination of unlimited mule deer tags and changes to licensing and permits for antlerless deer and elk, most of the discussion revolved around the proposed changes to area hunting districts.

Arnold hosted the meeting in the absence of both Region 2 Wildlife Manager Mike Thompson, who recently retired, and wildlife biologist Scott Eggeman, who also left his position with FWP recently.

Arnold acknowledged the simplification effort has been met with controversy since Hank Worsech, the new director of the Department of Fish, Wildlife and Parks, set it in motion last summer.

"What I really wanted to do is let you know the proposals presented a couple months ago, kind of in the scoping stage, was a new thing" he said.

Arnold explained that Worsech, who worked for FWP for 17 year and served as a a license bureau chief before being becoming the new director, understood where the complexity was and wanted to make a "hard stab" at making things easier. He added there is plenty of data and background on why both residents and nonresidents alike have been confused by the hunting regulations. Additionally, Arnold said most members of the Fish and Wildlife commission are new. While they are invested in simplifying hunting regulations, he said they're also receptive to hunter comments and input.

"Hunters have told us for years that our regulations are too complicated," Worsech said in an FWP press release in August. "Past efforts to simplify the regulations have mostly resulted in small changes every two years. It's time to take a more holistic look at the regulations to make them more understandable and effective."

Following public scoping of the first round of proposals last fall, FWP backed off on some of the more controversial changes, including some early proposed district boundary changes.

The response during public scoping last fall was mixed. Arnold said the overall response was that that some of it was OK, but generally hunters wanted to have a little bit of complexity and a little bit tighter control over local issues.

Arnold said as part of his first effort to simplify and combine districts, Eggeman included an expansion Hunting District 285 to include almost all of the Blackfoot, with the exception of areas like HD 282, the Blackfoot Clearwater Game Range, and HD 290, the archery district between Ovando and Helmville.

After scoping, Eggeman found his first iteration of HD 285, which historically has covered the Seeley Lake/Clearwater area west of Monture Creek, was simply too large, with too many variations in geography and habitat. Although he went back to the drawing board and scaled back some of the changes, those remaining for the deer and elk districts surrounding Lincoln are notable.

Perhaps the most controversial boundary change discussed at the Lincoln meeting was the elimination of HD 293, which had extended from the Continental Divide south of Highway 200, west to Ogden Mountain and south along Highway 141 to Highway 12 between Avon and MacDonald Pass.

Under the changes, the Ogden Mountain area would become part of HD 281the district north of Highway 200 from Rogers Pass to Monture Creek. A strip south of the Ogden Mountain area, from the Forest Service boundary to Highway 141, would be absorbed in a greatly expanded HD 291 that encompasses the majority of the Nevada Valley, including what was HD 298 south of Ovando.

The remaining eastern portion of HD 293 would then become part of HD 343, which would spill over into Region 2. That fact was a source of concern since it isn't addressed in the Region 2 information. Instead, the details are included under Region 3.

Arnold explained that the decision to make the area – which includes the Flesher and Stemple Pass areas all the way to Lincoln – as part of HD 343 stemmed from a desire to manage elk as an elk management unit.

"There really is a connection between elk on the east side and the west side. There is a lot of biological reason that managing that as an elk management unit makes sense," Arnold said. "There is a lot of social reason why that doesn't always make sense and a lot of preference for where those boundaries should be and how hunters hunt it and where those impacts will be."

Ovando resident Steve Kamps, formerly of Lincoln, said his concern is that the more aggressive elk reduction policies that have been used to control elk populations on private land east of the Divide in HD 343 could have a negative impact on elk numbers west of the divide, with a potential for overharvest.

"I just don't think the harvest on 343 fits this side of the Continental Divide" he said. "We don't have so many we need to be harvesting a bunch of cows"

Local taxidermist and hunter Jay Roberson agreed. "The divide is there, use it."

While they agreed boundary change with HD 291 made sense given the private land in the Nevada Valley, they suggested that, if the goal is to simplify district boundaries, it would make more sense and be less confusing if the area remainder of 293 was incorporated into HD 281.

Arnold also made it clear the decision isn't set in stone, saying the conversation during the earlier round of scoping was on the fence enough that the FWP Commission decided to approve it tentatively to go out for public comment.

"There's in interest in hearing what people want to do...and we'll be paying attention," he said.

More detailed information on HD 343 changes, including proposed elk harvest numbers, can be found online at https://fwp.mt.gov/aboutfwp/public-comment-opportunities/reg-proposals/deer-elk under Region 3

Another controversial change is the elimination of HD 284, the archery-only district immediately around Lincoln. The district would be absorbed into HD 281 but be designated as a weapons-restricted area for archery only.

"The boundary is exactly the same as where 284 used to be. The effect is the same, it just won't be its own district," Arnold said.

That fact raised the question of why it wouldn't then be simpler to keep it a separate district. Arnold explained that as a unique district, it has added regulatory requirements that would be contrary to efforts to simplify things. Additionally, he said the commission has a desire to do away with "boutique" districts.

"We've argued successfully that (Region 2 has) a lot of special stuff going on. There's a large population of people, a really diverse landscape, broken owner ship between private and public," he said. "There're a million reasons things are so unique here and we need ...the extra tools. And they were supportive of that. But when you've got a postage-stamp sized "boutique" district...there's not a ton of appetite for that."

Although much of the Lincoln meeting dealt with district boundaries, Arnold also touched on changes to deer and elk licenses and permits.

Among the changes being proposed are changes away from permits for antlerless animals. Generally speaking, there is an effort to clarify the language, with permits applying to bucks and bulls, while antlerless animals would fall under B tags.

The idea raised concerns at the meeting that it would limit some opportunities for hunters, while also presenting the possibility that hunters could use a B-tag to take two elk during the season, an idea that Arnold said generally isn't popular with hunters.

Local districts will also see changes to mule deer licensing, with the elimination of the unlimited permits for mule deer bucks.

Arnold said there was a lot of confusion around the unlimited mule Deer permits, which allowed hunters to put in for a mule deer buck permit for a specific district. Anyone who put in for for the permits would get one, but they would be limited to hunting a mule deer buck in that district.

Rather than keeping the unlimited mule deer buck permits for western Montana, the FWP looked states like Idaho, Wyoming and Colorado, which have shorter seasons for mule deer bucks. Under the new proposal, the plan is to replace the nlimited permits with a general deer license for the first three weeks of the rifle season.

White-tailed deer will be under a general deer license with, either-sex during archery season and limited antlerless B Licenses. 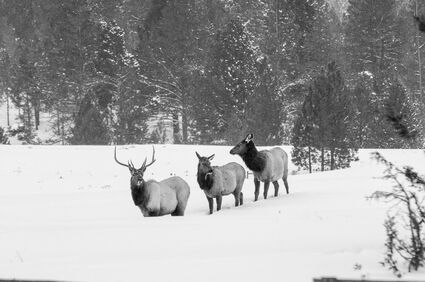 Details for hunting districts vary across the regions, so for a closer look at the specifics of the deer and elk season proposals, they are available online at fwp.mt.gov/regproposals.

For those without internet access or looking for more local details, Lincoln Game Warden Ezra Schwalm can also provide information on the proposed hunting season changes at 406-438-3666.

Comments on the season changes will be accepted until Friday, January 21, 2022, at 5 p.m. Comments can be submitted online at fwp.mt.gov/regproposals or by email to [email protected]

The Fish Wildlife Commission adoption the proposal will at the February 2022 commission meeting.