A worn out old pickup carried the memories of a family 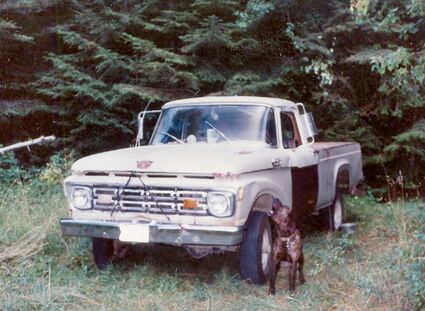 Whiskey, our father's plot hound, barks for the camera while standing next to the old Ford. Sporting piece of plywood for a tailgate, bungee cords for a hood catch and a mismatched door, the old truck was a standout in the Dey family history.

Editor's Note: On a recent trip to my parents place in Missoula, my mother showed me this story, written by my sister Kathy for a class back in 1992. It brought back a lot of memories. While Lincoln has always had its fair share of beat up old pickups, if you lived here between 1985 and about 1991, you may recall seeing my Dad, Mike Dey, driving this one around town or up in the woods.

I remember well that spring day in 1980 when Dad went to buy a· new truck. It was a warm sunny day and the whole family was working in the yard as we waited for Dad to come home; we were all very excited.

When Dad pulled into the yard, our mouths fell open in disbelief. Instead of a new truck Dad had bought an old truck, a 1964 Ford. The old truck was tan in color except for the rust spots scattered here and there, the drivers side door was maroon and it had no tailgate. Dad quickly explained it was only temporary. He would get that new truck as soon as he had more money. Temporary lasted a long time.

Dad had bought the truck to drive to work; as a logger he needed a four wheel drive. I remember going to work with Dad on several occasions. I would sit in the old truck and listen to the awesome sound of a huge tree falling to the ground or the constant din of the chainsaw, skidders, loaders, and log trucks as they worked away. I also remember the smells of the saw dust, gas, and pure mountain air. I would watch the birds, chipmunks, squirrels and an occasional deer going about their lives. I would lay on the seat of the Ford and sleep or read a book. Dad would come down from the mountain side to eat lunch with me. We would head home down some winding logging road as the sun started to set over the mountains.

That old truck was used for much more then just work. The whole family would load into the truck and head for the mountains.

We went camping, hunting, fishing, and spent lazy summer days going for long drives. That old truck carried us through some of the most beautiful scenery in Montana. That old Ford managed to scare us a few times along the way.

There was the summer we spent in Ashland, a little town in eastern Montana. The whole family spent a hot day swimming in a nearby river. On the way home Dad decided to take the shortcut, a winding mountain road. The road was rather steep and the brakes gave out just as we came upon a herd of horses. That old truck carried us safely home.

Dad always had hound dogs that rode in the front of his trucks and this one was no different. The hound this time was a Plot hound named Whiskey. Whiskey slept in that old truck when Dad took him to work and even lived in it from time to time. The seat had to be replaced many times because Whiskey loved to dig in it to make his bed.

Whiskey was carried to his final resting place on that ragged old truck seat. No dog has since slept on that seat.

To this day that seat still smells like an old hound dog.

The Ford was not only a home for Whiskey, but at one time for our family also. That old truck gave us a home when we had no other. It carried our belongings from one town to another so Dad could find work.

Dad has spent many hours working on the truck. I believe he knows the engine inside out. He had to replace the clutch a couple of times. Whenever he did, much of his time was spent cussing out that old truck.

After twelve years Dad finally got a better truck; still not a new one, just better. The old Ford has a few more dents and rust now, The engine is held together by bailing wire, and the old seat sits empty. It waits patiently to be driven one more time on one more adventure.

Dad recently thought of selling it but can't bring himself to do it. Even though I have been embarrassed to be seen in that old Ford at times, I know I'll mourn the day it goes.

That old truck holds the memories of a lifetime in every inch of its rusting old body.

Epilogue: In time, our father finally let go of that old Ford F-250. His older brother Bill wound up with it some years after this story was written.

Uncle Bill loaded it up on a trailer and took it to his home in Arizona. Bill passed away in 2006 and we've since lost track of that old Ford, but understand it was restored by one of our cousins.

While it's nice to know the truck that was so much a part of our lives was spared from the junk yard, I know a restoration probably cost it the unique character it had when Dad drove it; held together with little more than baling wire, electrical tape, bungee cords and wishful thinking.