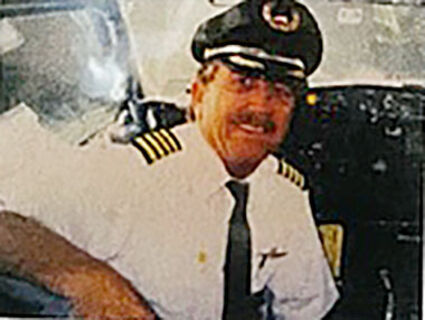 Charlie was a Navy veteran, airplane mechanic, and a captain for western and Delta Airlines. He retired from Delta in 2002 on the Boeing 767ER.

Charlie was honored by the FAA in his hangar in Lincoln, Montana, and received the Wright Brothers Master Pilot awarded for holding a pilot certificate for 50 years.

Charlie was an active member of Alcoholics Anonymous for 40 years. He had a unique gift to help other people get and stay sober.

He is survived by sister Karol and Eric Weatherby and sister-in-law Kathy Lewis, and many nieces and nephews. He was preceded in death by his parents, son Mike, and brother Kirk.

The Charlie Sherman Museum, Hangar 14, at the Lincoln Airport, is filled with his collection of pictures and airline memorabilia from his long flying career. The hanger is available to be shown by appointment with Bob and Karen Frank-Plumlee.

A service will be held at the old Lincoln cemetery in Lincoln, Mont. at a later date.