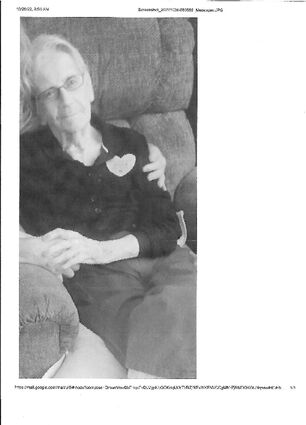 Martha Bourgault passed from this world into her forever home on Oct. 14, 2022.

She was born in Sand Coulee, Mont. on Dec. 17, 1922, the fifth of six children to Ernest and Anna (Gustafson) Forsman. She is survived by two sons, Michael Bourgault of Tblisi, Georgia; Luc Bourgault of Banner, Wyo., and one daughter-in-love, Jean Redfearn (Gary) of Cypress, Calif. Martha has three grandchildren, Brian Bourgault, Bridget Alvarado (Sal), and Branda Hawkins (Chris). She was also loved much by her great-grandchildren, Nathan Rosecrans, Joshua Bourgault, and Caiden Hawkins. In addition, she leaves behind nephews, a niece and a special cousin, Ron Rhule of Washington State.

After graduating from Centerville High School, Martha worked for the Deaconess Hospital and the Air Force in Great Falls. In 1945 she followed one of her friends to Oakland, Calif. While living there, Martha met Wilfred "Bill" Bourgault who was stationed there in the Navy. After a whirlwind courtship, she took the train to Boston and continued on to Nashua, N.H., Bill's hometown. After two weeks, Bill joined her when he was discharged from the Navy and they married on Feb. 8, 1946. In 1948, they decided to move to Alaska. They made it as far as Great Falls and decided to stay.

In the early 1960's, Bill and Martha built a cabin just outside of Lincoln. Bill retired from the Anaconda Co. in 1978 after he was injured on the job. They added indoor plumbing and extra rooms to the cabin and moved permanently to Lincoln. They both were avid members of the Ponderosa Snow Warriors snowmobile club, loved to golf, and get together with the many friends in Lincoln. Bill died from cancer in 1995, but Martha continued to be very active, playing pinochle, dominos and bingo. She also loved to gather for holy board contests, which she usually won.

Martha moved to California in 2017 and lived with Jean and Gary. She taught all her grandsons to love dominos and was able to attend the boys' sporting events to cheer them on.

Martha remained in good health until her body decided it was time to go and she passed peacefully in her sleep. All of us who knew and loved Martha will miss her and look forward to seeing her again on the other side.