Living: Is there enough creativity in your life? 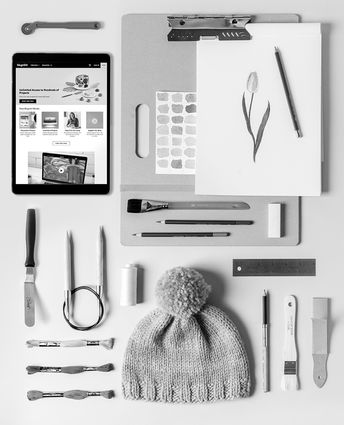 (StatePoint) New research suggests that Americans may be picking up paint brushes over remote controls.

Two-thirds of adults in a recent survey say they seek to use their creativity more in life, and 77 percent would rather give up their Netflix subscription for a year than their favorite creative hobby. The study, conducted by Bluprint, NBCUniversal's state-of-the-art digital lifestyle learning platform and streaming service, in partnership with IPSOS, explores the growth of creativity, and what brings people joy in 2019.

"What's clear is that Americans crave a greater sense of personal fulfillment," says Catherine Balsam-Schwaber, GM of Bluprint. "This may be the first time in American history that mothers are wishing for their children to be starving artists rather than wealthy and unhappy."

This is good news, as experts say that creativity has the potential to make people happier and improve their overall well-being.

"The scientific community knows that creativity offers huge benefits to individuals, both directly and via benefits to health and happiness," says Mark Runco, director of Creativity Research and Programming at Southern Oregon University.

Doctor prescribed creativity: Science has legitimized creativity as a critical component of well-being, and doctors are increasingly prescribing creative pursuits as part of medical prescription regimens. If given the choice, 57 percent of U.S. adults would rather take up a new creative hobby than start a new medication, if assured by their doctor it would have the same health benefits.

Handmade happiness: The majority of those surveyed love both the process of making something from scratch, as well as the joy they received from the finished project. Three in four U.S. adults currently participate in at least one creative activity, with baking, gardening, cooking (beyond everyday meals), home décor and DIY crafting being the most popular.

Happy accidents: Success as an end-goal is increasingly being put on the back-burner, as more people realize that mistakes are just a natural part of the creative journey. Indeed, 75 percent of those surveyed say making a mistake doesn't take away from their enjoyment in what they're creating.

Parents on board: Seventy-seven percent of parents want their children to have more opportunities to be creative than they did when they were young. In thinking about their future, 79 percent would rather their children make just enough to get by in a creative job that they love, over making lots of money in a job they aren't passionate about. Unfortunately, in parents' eyes, today's education system doesn't place enough emphasis on creativity, with 61 percent agreeing that public education lacks creative arts focus and 72 percent saying that standardized test scores are prioritized more than creative thinking.

To learn more about Bluprint, offering thousands of hours of content in categories such as crafting, knitting, wellness, cooking, baking, fitness and more, as well as access to curated supplies and a supportive community, visit mybluprint.com.

When focusing on your health, happiness and well-being, don't forget the importance of finding outlets that allow you to explore your everyday creativity.