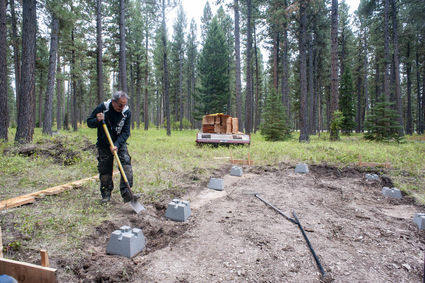 Stuart Ian Frost prepares a footing for his installation.

Stuart Ian Frost's inspiration for his yet-to-be-named piece at Blackfoot Pathways: Sculpture in the Wild, came from a trip to Garnet Ghost town last year. During his visit, he photographed various artifacts and the two things seemed to stand out to him: a crosscut saw blade with an intricate design and a small metal canister in the shape of a house, which he later learned was used to dispense maple syrup.

During that site visit, he also toured the Upper Blackfoot Valley Historical Society's buildings behind the Hi Country Jerky Plant and Trading Post. After seeing those buildings, and remembering the saw blade at Garnet, he had the idea to use the pattern from the blade to create a type of dwelling. The piece itself is based on one of the buildings he saw.

When Frost came for a site visit in July, he didn't come with a preconceived notion about what he was going to do, and if he hadn't done that visit, he said he never would have come up with something like what he's working on. "It's really specific to this place, and it works really well," Frost said.

Frost began installing hid piece at Sculpture in the Wild last week, after a week-long bustle of activity at his temporary work space in Brent and Carla Anderson's shop west of town. BPSW board member Gary Moseman assisted at the shop and continues to help with the installation, along with Marshall Bullis, the sculpture park's project manager. At the shop, all the pieces, with their detailed scrolls and carvings, had already been cut into planks from Douglas fir and each piece was treated with linseed oil. Frost explained that the wood was very dry and the oil will help protect the wood and give the final piece durability at the sculpture park. The wood for his project has been rough cut, not polished or finished and Frost believes that works well with the history stating that the saw blades of the past made everything look rough cut and he thought it was important to keep it looking man made, not machine made, even though it was a machine that did the cutouts.

Frost's work usually incorporates a combination of imagination and reality which enable him to create a unique and original piece. He took notice of how there was a difference in the dwellings he viewed in that some were not ornate, while others had more intricate details to them. He surmised it might have been due to economic status. Another thought was those early settlers may have needed to hurry and get shelter built because winter was coming and they didn't have the time to make the dwelling decorative.

As part of any of his sculptures, Frost takes into consideration the history of the area and the natural materials readily available to him. During his research for his piece, he discovered there were a number of people from Norway who settled in Montana many years ago, including his wife's grandfather. Frost, who lives in Norway, found that very interesting and attributes the possible reason for them settling here with the similar landscapes and climate between Norway and Montana, but says Montana is on a much larger scale.

As far as the piece itself goes, he doesn't know if anyone will notice it's based on a sawblade because the planks will be stacked to create a sort of building. Although it's an open form, it will appear to be something quite solid at the same time. This piece is a little different than what he might normally do, but there are some similarities because he says "You never really get away from what it is you do."

There is always some repetition in Frost's work and he pondered the idea that, as the design of the sawblades were repetitive, so was the back and forth action one might see using the saw to cut the wood.

Frost said this piece is a step forward for him and is totally different than anything he's ever done. It relates to his other work in that the materials are organic, but the shapes may not appear to be. He usually takes something more solid, like a tree, and takes it apart before putting it back together to form something else. For this particular piece, he had to create a model, which was cut with a laser. He says artists can get known for being the one who normally does this or that, but he's done something so different and totally specific to this place and he said that's what interests him. He's looking forward to seeing it because it's not like anything he's ever done before

Although there will be a little text in the park explaining the work, Frost doesn't want to say it's specifically one thing or another. He likes the fact that everyone will have their own thoughts about it, but thinks everyone will come around to the same sort of conclusion. He thinks everyone will get to the idea and inspiration of his piece in their own way, without him having to tell them. "Maybe the visual image will give them something to think about, like what happened all that time ago," he said, adding, "There's a lot of unanswered things and a lot of gaps in the history so maybe the gaps in the building might entice people to think about what and how all these things came about." He would be interested to know what folks see. After the piece has been here for a while, folks might get to know it by a nickname, which he considers a local thing, almost like a dialect that only the people here will know and understand. 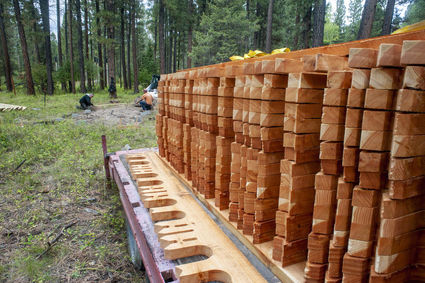 Oiled Douglas fir planks, carved to replicate the pattern of a saw blade, wait on a trailer while Frost and Marshall Bullis take measurements for the installation.

Frost said his favorite thing about doing sculptures like this is that he gets to interact with the people and materials of an area. "There are a lot of different aspects that you couldn't have known before you came." Frost said. He thinks that's why it's nicer to create and construct something on site, rather than to make something elsewhere and just "plunk it there."

Frost says he thinks that one of the reasons Lincoln is doing a great job with the park is that they are putting money into the arts, and people of all ages are engaged in it. He says it starts here in the school so young kids are engaged, which might not happen in a bigger town.

"Lincoln may be a small town, but a lot more happens here than meets the eye. For some of the kids, they might get involved in the arts because this might be the springboard for them. They can get involved and they can go and talk to the people and the artists; they get to meet the artists, whereas in a gallery it's just a piece on the wall," Frost said. "They are inspiring other people as well. They are doing something right."