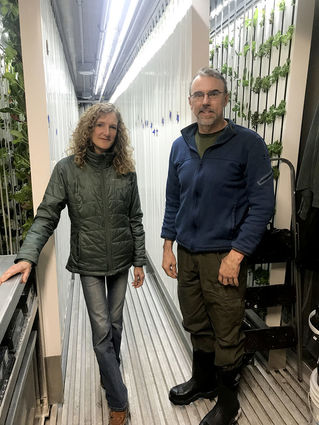 The Keep Cool Greens farm is a complete hydroponic farming system inside of a refrigerated, eight foot by 40 foot standard shipping container. The container farm can hold up to 4,000 heads of lettuce.

The Gibson are serial entrepreneurs who have a quality needed in a self-employed business – grit.

They married in 1985 and the next year they packed up and headed to Montana. When they made the trip from Texas, they drove a Pontiac Sunbird. The car had a transmission that was in such bad shape the mechanic said it wouldn't make it 100 miles. But that didn't stop the Gibsons.

They had decided before they left Texas that they would settle wherever the transmission gave out. With that plan, they left for Montana and successfully reached Kalispell, where that Sunbird continued to run for another couple of years.

The Gibsons relocated to Lincoln 16 years ago and established a successful log home builder website. But they were always looking to develop new and interesting business ideas.

The idea for Keep Cool Greens came from the original owner, Jennifer Stackpole who owns Balsam Root Catering. Stackpole, who also ran Wicked Good Greens, became so busy with her catering business she decided to sell the hydroponic unit.

"We thought it was a great idea especially in Montana where the growing season is so short," said Lisa Gibson.

The Gibsons currently grow 15 varieties of lettuce as well as kale, thyme, sage, basil, oregano, rosemary, chives, and rainbow chard. They have a wide selection of herbs they can provide.

"A great way to kick your salad up a notch is to add chervil and basil to it,"  Ron Gibson

Freight farming has a steep learning curve due to the sensitivity of the plants combined with the hot/cold zones within the freight farm.

"Neither one of us knew about hydroponics. The entire system including fertilizer dosing, water, and lights is run by a specialized computer. Plus we had to learn how to control pests in this environment It was a lot to learn" Lisa said. "The system uses six gallons of water a day. The water and fertilizer is pushed through the system by a recirculating pump to the emitters. What isn't taken up by the plants is sent back to a tank where the automatic dosing panel replenishes water, fertilizer, and adjusts PH as needed before the next cycle. We are lucky in that Ron already knows plumbing and electrical." 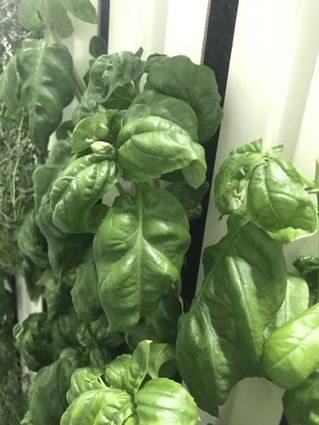 The Gibsons still are working to determine the needs of the local market. They said they would love feedback to determine what other options they may offer in the future.

Their produce will be available at D & D in Lincoln and wholesale to other businesses. They also plan to sell at the winter farmers market in Missoula that began this month.

Gibson's recommendation to others who want to start their own business is to do a lot of research. Talk to everyone you can, and have a ton of grit to stick to it, even when it's difficult.

The Gibsons are offering tours of the farm during the winter months. To learn more contact Ron & Lisa at 406-362-3054 or email at [email protected]