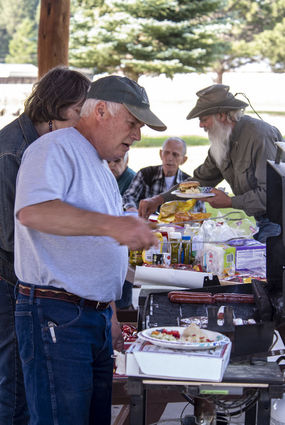 Jim Phennicie minds the grill at the cookout.

The event, which occurs each year on the third Wednesday in July, gives members the opportunity to gather, enjoy burgers, dogs and other pot luck items, and bring their annual membership dues.

"It's great to see everyone, and it gives them a chance to save a stamp." said Post 9 member Dawn Charron.

This year was the first year that reminder postcards were also sent to spouses of deceased members, inviting them to the event. 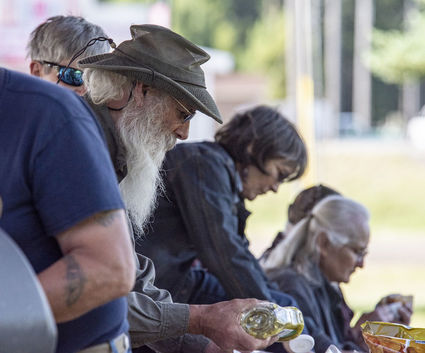 Rock Foreman squares away his hamburger.

"We're all family and it gives us all a chance to connect with one another over the summer when we don't have any meetings scheduled," said Charon.

Lincoln's Post 9 has approximately 60 members and has seen a recent increase in younger folks joining the group. This year they also had more members on the float and walking in Lincoln's annual 4th of July Parade than in past years.

The American Legion meets the third Wednesday of the month at 7 p.m., except during the summer months, and is open to anyone who is currently serving or has served in any branch of the armed forces.