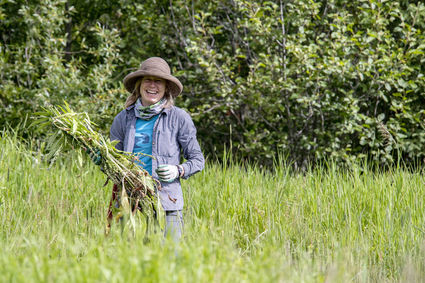 Jenny Tollefson, the stewardship director with Five Valley's Land Trust, holds a handful of weeds she pulled during the maintenance day July 17. Tollefson said their focus was on getting rid of hounds tongue, as well as mullen and Canada Thistle. She said the Lincoln Community River park is actually in good shape, weed-wise , compared to some other Five Valleys properties.

Local volunteers got together July 17 to pull weeds and perform maintenance at the Lincoln Community River Park on Stemple Pass Road.

Weed control is one of the biggest challenges in the park and needs ongoing attention. This is where volunteers and park goers alike can be of assistance. While volunteer days are often scheduled on short notice due to the weather dependency of weed spraying, park goers can help by pulling weeds and disposing of them while they are visiting the park. 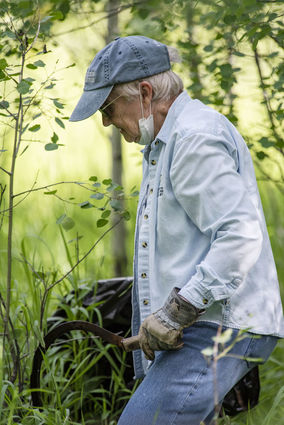 Karen Frank Plumlee pulls weeds from among a small stand of aspens.

Lewis and Clark County is currently conducting an analysis on the property, as it lies in the flood plain zone. Once that analysis is complete, and depending on those findings, the next big project for the park would be hardening the trails to make access to the river easier.

Ernie and Renee Lundberg, who helped organize the maintenance day, want to thank all the volunteers who came out to help last week and remind everyone that the park is there and available to those who want to access it. For those who would like to be added to a list to be called when work needs to be done at the park, contact the Lundbergs at 362-4072.