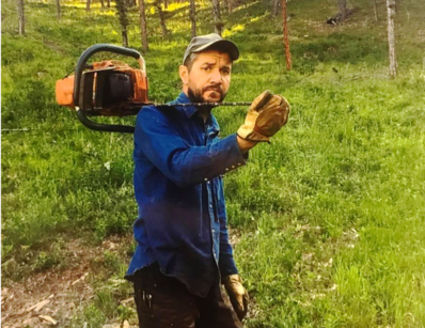 Chris Buster joined God's logging crew on Wednesday, Oct. 21in the mountains he loved above Lincoln.

Over the years he learned every tree and mountain in the valley. A drive with Chris wasn't complete without him pointing and saying, "I skidded that."

He was the proud father of Dianne and Bruce.

In 2012 he took a job in Yellowstone where he met Bobbijean.

They fell in love and got married overlooking Old Faithful.

Chris worked many jobs over the years. Out of all his jobs he always got called back to the woods. He was the owner of Buster Logging and an equipment operator for Westslope Excavation. Chris would call himself a jack-of-all-trades and a master of none. He could fix, run and operate anything you put in front of him.

Chris had a hard exterior but if you got inside you found a man that was truly giving of his time, love and energy. Family was always most important to Chris. He was happiest in the woods. He worked hard and loved harder. His sense of humor always could brighten your worst day.

Along with his wife Bobbijean and his parents, Chris is survived by his children Dianne Hemi and Bruce Frank; their mother, Michelle; his siblings, Curtiss Lee, Jody and Cindy; nieces and nephews Tyson, Devan, Charlie, Kylie, Chelsey, Donovan, Jordan; and great niece, Annabelle, along with so many friends he met along the way.

A celebration of life will be held at a later date.

"I've made peace with my maker, how about you?"