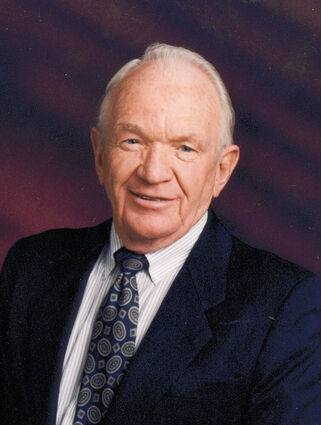 Joseph "Joe" William Turner passed away peacefully sleeping on Nov. 14, 2021 at his home in Longmont, Colo.. At 96 years old, he lived a long and abundant life for which he was very grateful.

Joe was born on July 9, 1925 in Morgan, Utah to Clara Hyde and Albert Roy Turner. He had one brother and three sisters. Joe grew up on his family dairy farm and helped plow the potato, cabbage and pea fields with draft horses. By age 6, he helped hand milk their dairy herd. Joe had a fear of mice, as at about age 5, his dad had him clean out one of the grain bins and a mouse crawled up his pants and started biting and scratching him. At 12-years-old he had become the projectionist at the local movie theater and continued working this job through High School. He learned the value of hard work and developed a lifetime love of horses, traits he would teach his children. After graduating from Morgan High School in 1944, he attended Utah State University.

During Joe's senior year of high school, March 4, 1944, he was wounded in his leg during an accidental gun discharge. Although this accident brought him a life-time of physical pain, it also brought him his greatest joy. It was during his hospital stay he met a young cadet nurse and the love of his life, Regina Kathleen Urban. They married on Feb. 14, 1947 in the LDS Temple in Logan and were married for 69 years until Regina's death in 2016.

Joe obtained his private pilot license and became an air traffic controller with the FAA in Pueblo, CO where the family moved in 1960. In 1963, they moved to Longmont, Colo. and Joe worked at Stapleton International Airport until his retirement. In addition to his full time job, he ran a used car business for many years. Upon retirement, he continued to work for Frontier Materials and Varra CO. Anyone who knew Joe knew he had an incredible work ethic!

Joe and Regina built their home in Longmont on a small farm they lived at for 53 years. Along with their children, they raised horses, cattle, chickens and grew huge gardens. Joe was determined his children would learn the value of hard work and "common sense" he believed living on a farm taught. They also raised and showed Arabian horses and later purchased a buggy that Joe and Regina loved to ride around in. When Joe's first purchase after they were married was a horse halter, Regina knew she had married a horse loving man.

Joe would give someone the shirt off his back if they were in need. Perhaps this is why he had so many friends. Or, perhaps it was also because he was a bit of a prankster and enjoyed having fun. Joe and Regina loved to travel together. They spent many summers in Montana living in their fiftth-wheel trailer. Both Joe and Regina loved the outdoors. They also loved ballroom and square dancing. May heaven give them the opportunity to dance again together forever! Both Joe and Regina will forever be loved and missed by anyone who had the fortunate opportunity to know them.

A Memorial Service was held on Monday, Nov. 22, 2021, at the Church of Jesus Christ of Latter-Day Saints in Lyons, Colo. Joe was interred with his wife, Regina, at Ryssby Church Cemetery in Longmont, Colo. Visit http://www.ahlbergfuneralchapel.com to share condolences.