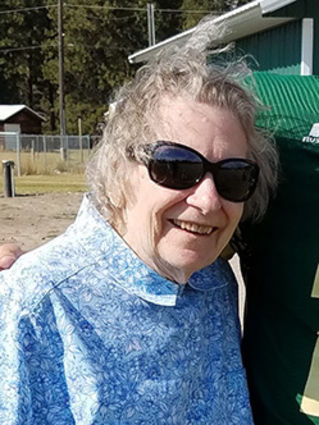 Marion L Morris passed away in her home in Lincoln, Mont. on Saturday Feb. 20, 2021. Born in Havre in 1927, Marion was the second to youngest of eight children.

In 1949, Marion married Robert (Bob) Morris and, with each having a young son, Gary and Robert, became a family of four. Two more boys, Eugene and Thomas, made their family of six complete. While Bob was the official employee of the National Park Service, the whole family lived the life of a park ranger. Beginning in Glacier National Park, the family was stationed all over the country "Border to border and coast to coast". For Marion, in her own words, "it was a good life".

After the loss of her husband in 1981, Marion moved from Seligman, Ariz. to Lincoln to be near her sons. Marion's retirement activities included a logging project with a group of ladies in their 50-70's, managing the Lincoln Community Hall, Bingo, Keno, Pinochle and performing what she considered her civic duties, such as volunteering at the cemetery clean-up day, Hunter's Stew Dinner and basically anything that required an extra set of hands. She could often be seen puttering around in her yard or on the road to Helena with any excuse to be out and about.

Marion is preceded in death by her parents, older siblings, her husband Robert and son Thomas. She is survived by her sister Ruthie; sons Robert, Gary and Eugene, six grandchildren and 14 great grandchildren. She was blessed with the title of great-great grandmother for one day before her passing.

The family will be gathering for a private goodbye later in the spring. In lieu of flowers, they ask for donations to Lincoln Senior Center or St. Peter's Hospice, both of whom offered services which allowed her to spend her final days at home.