By Rick and Susie Graetz
University of Montana

Series: This is Montana | Story 3 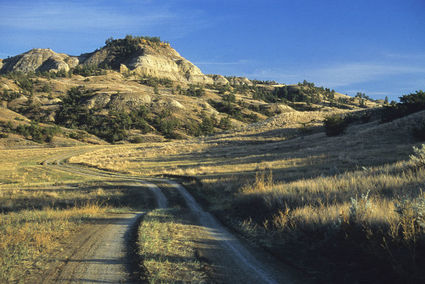 Charles M. Russell National Wildlife Refuge is a worthy detour on a journey down Montana Highway 200.

From the center of the state at Lewistown, it is 262 miles to Sidney and just a few miles further to the Dakota line. At night you can drive 50 miles or more and never see another vehicle. Fly over it at after dark and you rarely notice a light. This far-flung portion of Hwy 200 traverses Montana's loneliest stretch of geography.

But that is this huge swath of landscapes greatest asset. For what it lacks in civilization, it makes up for in the grandeur of the prairie and the echoes of history. Montana Highway 200, originating at the Idaho border in the northwest part of our state, is your trail across this great corner of America.

Departing Lewistown with the compass pointing towards the sunrise, the road climbs through the western foothills of the forest covered Judith Mountains, an island uplift in the vast sea of Montana's Northern Great Plains. Atop the pass you get a glimpse of the elongated mass of the Big and Little Snowies to the south. The view shed to the northwest brings out the lower lying North and South Moccasins. Gravitating down the east slope, the northern reaches of the Judiths, marked by the distinct form of Black Butte, are tailing off towards your left. Few ranches show on the way to Hwy 200's Junction with Hwy 19, coming in from the north. The small community of Grass Range is just one mile down the road. A busy café and gas station sit on the edge of town.

The description that follows assumes that you have several days to complete the journey. You can make it in a day but then there is no time for wandering.

For a worthy side trip, head north on Hwy 19 towards Malta. It is 39 miles straight ahead to the Missouri River crossing and the western end of the 1.1 million-acre Charles M. Russell National Wildlife Refuge. The folks at the Sand Creek Wildlife Station at the top of the hill on the south side of the river can give you plenty of information on what to see and do in this wildlife haven. Camp at the James Kipp Recreation site off the Fred Robinson Bridge for the night.

When your adventure here is finished, head back south to Hwy 200. Once again moving eastward, it is 23 miles to Winnett, seat of Petroleum County. With the establishment of a post office in 1912, Winnett officially became a town and grew on the homestead rush and the discovery of one of the richest pockets of oil at Cat Creek in 1920. The demise of the same events emptied the community. Gas and food are available and it is worth stopping in to visit this place that in its heyday was rollicking and prosperous.

Fifteen miles beyond Winnett you will pass over the storied Musselshell River. Roads from here and Winnett lead into the Missouri River Breaks and the CMR Wildlife Refuge.

McDonald Creek edges the south flank of Hwy 200 beyond Winnett and empties into the Musselshell. The country along the way consists of a river bottom with pine-covered bluffs to the south and north. After crossing the Musselshell River, the road climbs through high hills with a mixture of sagebrush and an open forest of ponderosa and juniper pines. Up until now, you have been gradually descending from a high plateau that begins at the foot of the Northern Rocky Mountains. Lewistown sits at an elevation of 3,963 feet, while Sidney is 1,931 feet above sea level.

At milepost 160, an historic sign points out the one-time location of Fort Musselshell on the Missouri River about 35 miles to the north. In the 1860s and 1870s, the fort served as a trading post and stopping place for Missouri River steamboats. The River Crow and Gros Ventre Indians also traded here. The sign points out that other tribes, namely the Assiniboine and Sioux, regarded at this post as an amusement center where bands of ambitious braves could lie in ambush and get target practice on careless whites.

This was a lawless land. Errant cowboys and outlaws considered the rancher's four-footed inventory to be fair game. In 1884, Granville Stuart, often considered the grandfather of Montana, disposed of the cattle and horse rustlers holed up along the Musselshell, especially at its mouth with the Missouri, by subjecting them to vigilante justice carried out by Stuart's Stranglers.

At one time, this area served as a river passage point for migrating bison herds that thundered by the millions across the very land the highway now bisects. On a day when the wind is still, listen and you might hear the shouts of the Indian hunters as they pursued these mighty animals. Indeed, every mile of the way suggests a story of the Plains Indians who frequented this segment of eastern Montana.